The Drama of the Forests Romance and Adventure 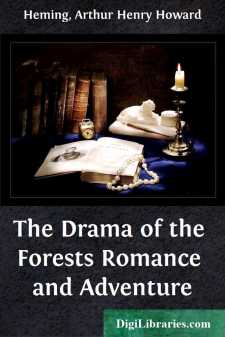 I ROMANCE AND ADVENTURE HER FATHER THE FREE TRADER

It was September 9, 189-. From sunrise to sunset through mist, sunshine, shower, and shadow we travelled, and the nearer we drew to our first destination, the wilder the country became, the more water-fowl we saw, and the more the river banks were marked with traces of big game. Here signs told us that three caribou had crossed the stream, there muddy water was still trickling into the hoofprint of a moose, and yonder a bear had been fishing. Finally, the day of our arrival dawned, and as I paddled, I spent much of the time dreaming of the adventure before me. As our beautiful birchen craft still sped on her way, the handsome bow parted the shimmering waters, and a passing breeze sent little running waves gurgling along her sides, while the splendour of the autumn sun was reflected on a far-reaching row of dazzling ripples that danced upon the water, making our voyageurs lower their eyes and the trader doze again. There was no other sign of life except an eagle soaring in and out among the fleecy clouds slowly passing overhead. All around was a panorama of enchanting forest.

My travelling companion was a "Free Trader," whose name was Spear—a tall, stoop-shouldered man with heavy eyebrows and shaggy, drooping moustache. The way we met was amusing. It happened in a certain frontier town. His first question was as to whether I was single. His second, as to whether my time was my own. Then he slowly looked me over from head to foot. He seemed to be measuring my stature and strength and to be noting the colour of my eyes and hair.

Narrowing his vision, he scrutinized me more carefully than before, for now he seemed to be reading my character—if not my soul. Then, smiling, he blurted out:

"Come, be my guest for a couple of weeks. Will you?"

He frowned. But on realizing that my mirth was caused only by surprise, he smiled again and let flow a vivid description of a place he called Spearhead. It was the home of the northern fur trade. It was the centre of a great timber region. It was the heart of a vast fertile belt that was rapidly becoming the greatest of all farming districts. It was built on the fountain head of gigantic water power. It virtually stood over the very vault that contained the richest veins of mineral to be found in the whole Dominion—at least that's what he said—and he also assured me that the Government had realized it, too, for was it not going to hew a provincial highway clean through the forest to Spearhead? Was it not going to build a fleet of steamers to ply upon the lakes and rivers in that section? And was it not going to build a line of railroad to the town itself in order to connect it with the new transcontinental and thus put it in communication with the great commercial centres of the East and the West? In fact, he also impressed upon me that Spearhead was a town created for young men who were not averse to becoming wealthy in whatever line of business they might choose....