The Double-Dealer, a comedy 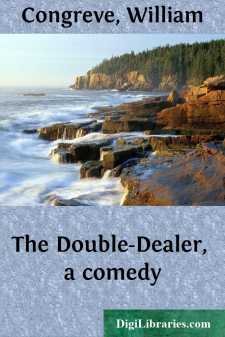 TO THERIGHT HONOURABLE CHARLES MONTAGUE,ONE OF THE LORDS OF THE TREASURY.

Sir,—I heartily wish this play were as perfect as I intended it, that it might be more worthy your acceptance, and that my dedication of it to you might be more becoming that honour and esteem which I, with everybody who is so fortunate as to know you, have for you.  It had your countenance when yet unknown; and now it is made public, it wants your protection.

I would not have anybody imagine that I think this play without its faults, for I am conscious of several.  I confess I designed (whatever vanity or ambition occasioned that design) to have written a true and regular comedy, but I found it an undertaking which put me in mind of Sudet multum, frustraque laboret ausus idem.  And now, to make amends for the vanity of such a design, I do confess both the attempt and the imperfect performance.  Yet I must take the boldness to say I have not miscarried in the whole, for the mechanical part of it is regular.  That I may say with as little vanity as a builder may say he has built a house according to the model laid down before him, or a gardener that he has set his flowers in a knot of such or such a figure.  I designed the moral first, and to that moral I invented the fable, and do not know that I have borrowed one hint of it anywhere.  I made the plot as strong as I could because it was single, and I made it single because I would avoid confusion, and was resolved to preserve the three unities of the drama.  Sir, this discourse is very impertinent to you, whose judgment much better can discern the faults than I can excuse them; and whose good nature, like that of a lover, will find out those hidden beauties (if there are any such) which it would be great immodesty for me to discover.  I think I don’t speak improperly when I call you a lover of poetry; for it is very well known she has been a very kind mistress to you: she has not denied you the last favour, and she has been fruitful to you in a most beautiful issue.  If I break off abruptly here, I hope everybody will understand that it is to avoid a commendation which, as it is your due, would be most easy for me to pay, and too troublesome for you to receive.

I have since the acting of this play harkened after the objections which have been made to it, for I was conscious where a true critic might have put me upon my defence.  I was prepared for the attack, and am pretty confident I could have vindicated some parts and excused others; and where there were any plain miscarriages, I would most ingenuously have confessed ’em.  But I have not heard anything said sufficient to provoke an answer.  That which looks most like an objection does not relate in particular to this play, but to all or most that ever have been written, and that is soliloquy.  Therefore I will answer it, not only for my own sake, but to save others the trouble, to whom it may hereafter be objected.

I grant that for a man to talk to himself appears absurd and unnatural, and indeed it is so in most cases; but the circumstances which may attend the occasion make great alteration.  It oftentimes happens to a man to have designs which require him to himself, and in their nature cannot admit of a confidant.  Such for certain is all villainy, and other less mischievous intentions may be very improper to be communicated to a second person.  In such a case, therefore, the audience must observe whether the person upon the stage takes any notice of them at all or no.  For if he supposes any one to be by when he talks to himself, it is monstrous and ridiculous to the last degree.  Nay, not only in this case, but in any part of a play, if there is expressed any knowledge of an audience, it is insufferable.  But otherwise, when a man in soliloquy reasons with himself, and pro’s and con’s, and weighs all his designs, we ought not to imagine that this man either talks to us or to himself; he is only thinking, and thinking such matter as were inexcusable folly in him to speak.  But because we are concealed spectators of the plot in agitation, and the poet finds it necessary to let us know the whole mystery of his contrivance, he is willing to inform us of this person’s thoughts; and to that end is forced to make use of the expedient of speech, no other better way being yet invented for the communication of thought....