The Door Through Space 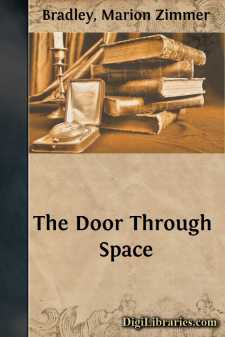 Beyond the spaceport gates, the men of the Kharsa were hunting down a thief. I heard the shrill cries, the pad-padding of feet in strides just a little too long and loping to be human, raising echoes all down the dark and dusty streets leading up to the main square.

But the square itself lay empty in the crimson noon of Wolf. Overhead the dim red ember of Phi Coronis, Wolf's old and dying sun, gave out a pale and heatless light. The pair of Spaceforce guards at the gates, wearing the black leathers of the Terran Empire, shockers holstered at their belts, were drowsing under the arched gateway where the star-and-rocket emblem proclaimed the domain of Terra. One of them, a snub-nosed youngster only a few weeks out from Earth, cocked an inquisitive ear at the cries and scuffling feet, then jerked his head at me.

"Hey, Cargill, you can talk their lingo. What's going on out there?"

I stepped out past the gateway to listen. There was still no one to be seen in the square. It lay white and windswept, a barricade of emptiness; to one side the spaceport and the white skyscraper of the Terran Headquarters, and at the other side, the clutter of low buildings, the street-shrine, the little spaceport cafe smelling of coffee and jaco, and the dark opening mouths of streets that rambled down into the Kharsa—the old town, the native quarter. But I was alone in the square with the shrill cries—closer now, raising echoes from the enclosing walls—and the loping of many feet down one of the dirty streets.

Then I saw him running, dodging, a hail of stones flying round his head; someone or something small and cloaked and agile. Behind him the still-faceless mob howled and threw stones. I could not yet understand the cries; but they were out for blood, and I knew it.

I said briefly, "Trouble coming," just before the mob spilled out into the square. The fleeing dwarf stared about wildly for an instant, his head jerking from side to side so rapidly that it was impossible to get even a fleeting impression of his face—human or nonhuman, familiar or bizarre. Then, like a pellet loosed from its sling, he made straight for the gateway and safety.

And behind him the loping mob yelled and howled and came pouring over half the square. Just half. Then by that sudden intuition which permeates even the most crazed mob with some semblance of reason, they came to a ragged halt, heads turning from side to side.

I stepped up on the lower step of the Headquarters building, and looked them over.

Most of them were chaks, the furred man-tall nonhumans of the Kharsa, and not the better class. Their fur was unkempt, their tails naked with filth and disease. Their leather aprons hung in tatters. One or two in the crowd were humans, the dregs of the Kharsa. But the star-and-rocket emblem blazoned across the spaceport gates sobered even the wildest blood-lust somewhat; they milled and shifted uneasily in their half of the square.

For a moment I did not see where their quarry had gone. Then I saw him crouched, not four feet from me, in a patch of shadow....