The Dominion of the Air; the story of aerial navigation 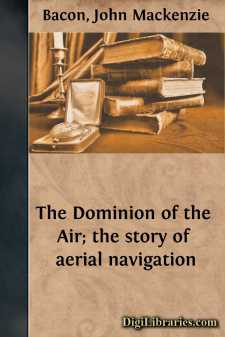 CHAPTER I. THE DAWN OF AERONAUTICS.

"He that would learn to fly must be brought up to the constant practice of it from his youth, trying first only to use his wings as a tame goose will do, so by degrees learning to rise higher till he attain unto skill and confidence."

So wrote Wilkins, Bishop of Chester, who was reckoned a man of genius and learning in the days of the Commonwealth. But so soon as we come to inquire into the matter we find that this good Bishop was borrowing from the ideas of others who had gone before him; and, look back as far as we will, mankind is discovered to have entertained persistent and often plausible ideas of human flight. And those ideas had in some sort of way, for good or ill, taken practical shape. Thus, as long ago as the days when Xenophon was leading back his warriors to the shores of the Black Sea, and ere the Gauls had first burned Rome, there was a philosopher, Archytas, who invented a pigeon which could fly, partly by means of mechanism, and partly also, it is said, by aid of an aura or spirit. And here arises a question. Was this aura a gas, or did men use it as spiritualists do today, as merely a word to conjure with?

Four centuries later, in the days of Nero, there was a man in Rome who flew so well and high as to lose his life thereby. Here, at any rate, was an honest man, or the story would not have ended thus; but of the rest—and there are many who in early ages aspired to the attainment of flight—we have no more reason to credit their claims than those of charlatans who flourish in every age.

In medieval times we are seriously told by a saintly writer (St. Remigius) of folks who created clouds which rose to heaven by means of "an earthen pot in which a little imp had been enclosed." We need no more. That was an age of flying saints, as also of flying dragons. Flying in those days of yore may have been real enough to the multitude, but it was at best delusion. In the good old times it did not need the genius of a Maskelyne to do a "levitation" trick. We can picture the scene at a "flying seance." On the one side the decidedly professional showman possessed of sufficient low cunning; on the other the ignorant and highly superstitious audience, eager to hear or see some new thing—the same audience that, deceived by a simple trick of schoolboy science, would listen to supernatural voices in their groves, or oracular utterances in their temples, or watch the urns of Bacchus fill themselves with wine. Surely for their eyes it would need no more than the simplest phantasmagoria, or maybe only a little black thread, to make a pigeon rise and fly.

It is interesting to note, however, that in the case last cited there is unquestionably an allusion to some crude form of firework, and what more likely or better calculated to impress the ignorant! Our firework makers still manufacture a "little Devil." Pyrotechnic is as old as history itself; we have an excellent description of a rocket in a document at least as ancient as the ninth century. And that a species of pyrotechny was resorted to by those who sought to imitate flight we have proof in the following recipe for a flying body given by a Doctor, eke a Friar, in Paris in the days of our King John:—