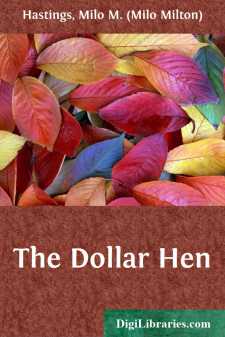 CHAPTER I IS THERE MONEY IN THE POULTRY BUSINESS?

The chicken business is big. No one knows how big it is and no one can find out. The reason it is hard to find out is because so many people are engaged in it and because the chicken crop is sold, not once a year, but a hundred times a year.

The only real statistics for the poultry crop of the United States are those of the Federal Census. At this writing these statistics are nine years old and somewhat out of date. The value of poultry and eggs in 1899, according to the census figures, was $291,000,000. Is this too big or too little? I don't know. If the reader wishes to know let him imagine the census enumerator asking a farmer the value of the poultry and eggs which he has produced the previous year. Would the farmer's guess be too big or too small?

From these census figures as a base, estimates have been made for later years. The Secretary of Agriculture, or, speaking more accurately, a clerk in the Statistical Bureau of the Department of Agriculture, says the poultry and egg crop for 1907 was over $600,000,000.

The best two sources of information known to the writer by which this estimate may be checked are the receipts of the New York market and the annual "Value of Poultry and Eggs Sold," as given by the Kansas State Board of Agriculture.

In plate I the top curve a-a gives the average spring price of Western first eggs in the New York market. The curve b-b gives the annual receipts of eggs at New York in millions of cases. Now, since value equals quantity multiplied by price, and since the quantity and values of poultry are closely correlated to those of eggs, the product of these two figures is a fair means of showing the rate of increase in the value of the poultry crop. Starting with the census value of $291,000,000 for the year 1899, we thus find that by 1907 the amount is very close to $700,000,000. This is represented by the lower line.

The value of the poultry and eggs sold in Kansas have increased as follows:

The dotted line e-e represents the increase in the national poultry and egg crop estimated from the Kansas figures. Evidently the estimate given in Secretary Wilson's report was not excessive.

Now, I want to call the reader's attention to some relations about which there can be no doubt and which are even more significant. The straight line c-c in Plate 1 represents the rate of increase of population in this country. The line b-b represents the rate of increase in egg receipts at New York. As the country data backs up the New York figures, the conclusion is inevitable that the production of poultry and eggs is increasing much more rapidly than is our population.

"Over-production," I hear the pessimist cry, but unfortunately for Friend Pessimist, we have a gauge on the over-production idea that lays all fears to rest....