The Dingo Boys The Squatters of Wallaby Range 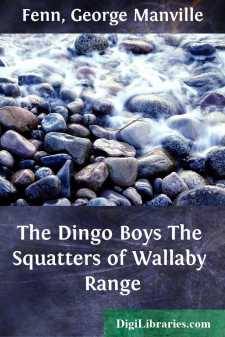 “Have I Done Right?”

“Stop and take up a run close by. If you go yonder, the piggers’ll eat you without salt.”

Here followed a roar of laughter from the party of idlers who were busy doing nothing with all their might, as they lounged about the wharves and warehouses of Port Haven.

Emigrants’ guide-books said that Port Haven was a busy rising town well inside the Barrier Reef on the east coast of Northern Australia, and offered abundant opportunities for intending settlers.

On this particular sunny morning Port Haven was certainly not “busy,” and if “rising,” it had not risen enough for much of it to be visible. There were a few wooden buildings of a very rough description; there was a warehouse or two; and an erection sporting a flagstaff and a ragged Union Jack, whose front edge looked as if the rats had been trying which tasted best, the red, white, or blue; and upon a rough board nailed over the door was painted in white letters, about as badly as possible, “Jennings’ Hotel;” but the painter had given so much space to “Jennings’,” that “Hotel” was rather squeezed, like the accommodation inside; and consequently from a distance, that is to say, from the deck of the ship Ann Eliza of London, Norman Bedford could only make out “Jennings’ Hot,” and he drew his brother and cousin’s attention to the fact—the ‘el’ being almost invisible.

“So’s everybody else,” said their cousin, Artemus Lake. “I’m melting, and feel as if I was standing in a puddle. But I say, Man, what a place to call a port!”

“Oh, it doesn’t matter,” said Norman. “Of course we’re not going to stop here. Are we going to anchor close up to that pier thing?”

“Gammon! why, it’s only a few piles and planks.—I say, Rifle, look there. That’s a native;” and the boy pointed to a very glossy black, who had been squatting on his heels at the edge of the primitive wharf, but who now rose up, planted the sole of his right foot against the calf of his left leg, and kept himself perpendicular by means of what looked like a very thin clothes-prop.

Captain Bedford, retired officer of the Royal Engineers, a bluff, slightly grey man of fifty, who was answerable as father and godfather for the rather formidable names of the three bright, sun-burned, manly lads of fifteen to seventeen—names which the boys had shortened into “Man,” “Tim,” and “Rifle”—overheard the conversation and laughed.

“Yes, that’s a native, boys,” he said; “and it is a primitive place, and no mistake, but you’re right: we shall only stop here long enough to load up, and then off we go inland, pioneers of the new land.”

Man tossed up his straw hat, and cried “hooray!” his brother joined in, and the sailors forward, who were waiting to warp the great vessel alongside the rough wharf, joined in the cheer, supposing the shout to be given because, after months of bad weather, they were all safe in a sunny port....