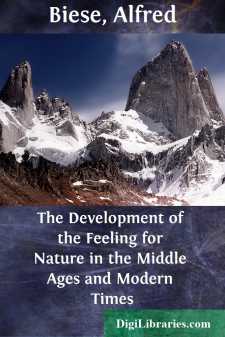 Nature in her ever-constant, ever-changing phases is indispensable to man, his whole existence depends upon her, and she influences him in manifold ways, in mind as well as body.

The physical character of a country is reflected in its inhabitants; the one factor of climate alone gives a very different outlook to northerner and southerner. But whereas primitive man, to whom the darkness of night meant anxiety, either feared Nature or worshipped her with awe, civilised man tries to lift her veil, and through science and art to understand her inner and outer beauty--the scientist in her laws, the man of religion in her relation to his Creator, the artist in reproducing the impressions she makes upon him.

Probably it has always been common to healthy minds to take some pleasure in her; but it needs no slight culture of heart and mind to grasp her meaning and make it clear to others. Her book lies open before us, but the interpretations have been many and dissimilar. A fine statue or a richly-coloured picture appeals to all, but only knowledge can appreciate it at its true value and discover the full meaning of the artist. And as with Art, so with Nature.

For Nature is the greatest artist, though dumb until man, with his inexplicable power of putting himself in her place, transferring to her his bodily and mental self, gives her speech. Goethe said 'man never understands how anthropomorphic he is.' No study, however comprehensive, enables him to overstep human limits, or conceive a concrete being, even the highest, from a wholly impersonal point of view. His own self always remains an encumbering factor. In a real sense he only understands himself, and his measure for all things is man. To understand the world outside him, he must needs ascribe his own attributes to it, must lend his own being to find it again.

This unexplained faculty, or rather inherent necessity, which implies at once a power and a limit, extends to persons as well as things. The significant word sympathy expresses it. To feel a friend's grief is to put oneself in his place, think from his standpoint and in his mood--that is, suffer with him. The fear and sympathy which condition the action of tragedy depend upon the same mental process; one's own point of view is shifted to that of another, and when the two are in harmony, and only then, the claim of beauty is satisfied, and æsthetic pleasure results.

By the well-known expression of Greek philosophy, 'like is only understood by like,' the Pythagoreans meant that the mathematically trained mind is the organ by which the mathematically constructed cosmos is understood. The expression may also serve as an æsthetic aphorism. The charm of the simplest lyrical song depends upon the hearer's power to put himself in the mood or situation described by the poet, on an interplay between subject and object.

Everything in mental life depends upon this faculty. We observe, ponder, feel, because a kindred vibration in the object sets our own fibres in motion....