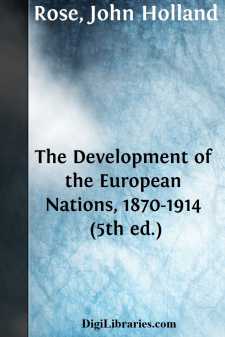 CHAPTER I THE CAUSES OF THE FRANCO-GERMAN WAR "After the fatal year 1866, the Empire was in a state of decadence."--L. GREGOIRE, Histoire de France.

The irony of history is nowhere more manifest than in the curious destiny which called a Napoleon III. to the place once occupied by Napoleon I., and at the very time when the national movements, unwittingly called to vigorous life by the great warrior, were attaining to the full strength of manhood. Napoleon III. was in many ways a well-meaning dreamer, who, unluckily for himself, allowed his dreams to encroach on his waking moments. In truth, his sluggish but very persistent mind never saw quite clearly where dreams must give way to realities; or, as M. de Falloux phrased it, "He does not know the difference between dreaming and thinking." Thus his policy showed an odd mixture of generous haziness and belated practicality.

Long study of his uncle's policy showed him, rightly enough, that it erred in trampling down the feeling of nationality in Germany and elsewhere. The nephew resolved to avoid this mistake and to pose as the champion of the oppressed and divided peoples of Italy, Germany, Poland, and the Balkan Peninsula--a programme that promised to appeal to the ideal aspirations of the French, to embarrass the dynasties that had overthrown the first Napoleon, and to yield substantial gains for his nephew. Certainly it did so in the case of Italy; his championship of the Roumanians also helped on the making of that interesting Principality (1861) and gained the goodwill of Russia; but he speedily forfeited this by his wholly ineffective efforts on behalf of the Poles in 1863. His great mistakes, however, were committed in and after the year 1863, when he plunged into Mexican politics with the chimerical aim of founding a Roman Catholic Empire in Central America, and favoured the rise of Prussia in connection with the Schleswig-Holstein question. By the former of these he locked up no small part of his army in Mexico when he greatly needed it on the Rhine; by the latter he helped on the rise of the vigorous North German Power.

As we have seen, he secretly advised Prussia to take both Schleswig and Holstein, thereby announcing his wish for the effective union of Germans with the one great State composed almost solely of Germans. "I shall always be consistent in my conduct," he said. "If I have fought for the independence of Italy, if I have lifted up my voice for Polish nationality, I cannot have other sentiments in Germany, or obey other principles." This declaration bespoke the doctrinaire rather than the statesman. Untaught by the clamour which French Chauvinists and ardent Catholics had raised against his armed support of the Italian national cause in 1859, he now proposed to further the aggrandisement of the Protestant North German Power which had sought to partition France in 1815.

The clamour aroused by his leanings towards Prussia in 1864-66 was naturally far more violent, in proportion as the interests of France were more closely at stake. Prussia held the Rhine Province; and French patriots, who clung to the doctrine of the "natural frontiers"--the Ocean, Pyrenees, Alps, and Rhine--looked on her as the natural enemy. They pointed out that millions of Frenchmen had shed their blood in the Revolutionary and Napoleonic wars to win and to keep the Rhine boundary; and their most eloquent spokesman, M. Thiers, who had devoted his historical gifts to glorifying those great days, passionately declaimed against the policy of helping on the growth of the hereditary foe.

We have already seen the results of this strife between the pro-Prussian foibles of the Emperor and the eager prejudices of Frenchmen, whose love of oppressed and divided nations grew in proportion to their distance from France, and changed to suspicion or hatred in the case of her neighbours....