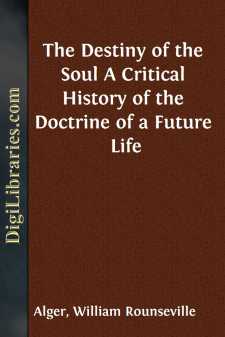 PREFACE TO THE TENTH EDITION.

THIS work has passed through nine editions, and has been out of print now for nearly a year. During the twenty years which have elapsed since it was written, the question of immortality, the faith and opinions of men and the drift of criticism and doubt concerning it, have been a subject of dominant interest to me, and have occupied a large space in my reading and reflection. Accordingly, now that my publisher, moved by the constant demand for the volume, urges the preparation of a new edition introducing such additional materials as my continued researches have gathered or constructed, I gladly comply with his request.

The present work is not only historic but it is also polemic; polemic, however, not in the spirit or interest of any party or conventicle, but in the spirit and interest of science and humanity. Orthodoxy insists on doctrines whose irrationality in their current forms is such that they can never be a basis for the union of all men. Therefore, to discredit these, in preparation for more reasonable and auspicious views, is a service to the whole human race. This is my justification for the controversial quality which may frequently strike the reader.

Looking back over his pages, after nearly a quarter of a century more of investigation and experience, the author is grateful that he finds nothing to retract or expunge. He has but to add such thoughts and illustrations as have occurred to him in the course of his subsequent studies. He hopes that the supplementary chapters now published will be found more suggestive and mature than the preceding ones, while the same in aim and tone. For he still believes, as he did in his earlier time, that there is much of error and superstition, bigotry and cruelty, to be purged out of the prevailing theological creed and sentiment of Christendom. And he still hopes, as he did then, to contribute something of good influence in this direction. The large circulation of the work, the many letters of thanks for it received by the author from laymen and clergymen of different denominations, the numerous avowed and unavowed quotations from it in recent publications, all show that it has not been produced in vain, but has borne fruit in missionary service for reason, liberty, and charity.

This ventilating and illumining function of fearless and reverential critical thought will need to be fulfilled much longer in many quarters. The doctrine of a future life has been made so frightful by the preponderance in it of the elements of material torture and sectarian narrowness, that a natural revulsion of generous sentiment joins with the impulse of materialistic science to produce a growing disbelief in any life at all beyond the grave. Nothing else will do so much to renew and extend faith in God and immortality as a noble and beautiful doctrine of God and immortality, freed from disfiguring terror, selfishness, and favoritism.

The most popular preacher in England has recently asked his fellow believers, "Can we go to our beds and sleep while China, India, Japan, and other nations are being damned?" The proprietor of a great foundry in Germany, while he talked one day with a workman who was feeding a furnace, accidentally stepped back, and fell headlong into a vat of molten iron....