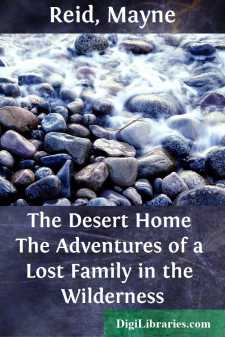 There is a great desert in the interior of North America. It is almost as large as the famous Saära of Africa. It is fifteen hundred miles long, and a thousand wide. Now, if it were of a regular shape—that is to say, a parallelogram—you could at once compute its area, by multiplying the length upon the breadth; and you would obtain one million and a half for the result—one million and a half of square miles. But its outlines are as yet very imperfectly known; and although it is fully fifteen hundred miles long, and in some places a thousand in breadth, its surface-extent is probably not over one million of square miles, or twenty-five times the size of England. Fancy a desert twenty-five times as big as all England! Do you not think that it has received a most appropriate name when it is called the Great American Desert?

Now, my young friend, what do you understand by a desert? I think I can guess. When you read or hear of a desert, you think of a vast level plain, covered with sand, and without trees, or grass, or any kind of vegetation. You think, also, of this sand being blown about in thick yellow clouds, and no water to be met with in any direction. This is your idea of a desert, is it not? Well, it is not altogether the correct one. It is true that in almost every desert there are these sandy plains, yet are there other parts of its surface of a far different character, equally deserving the name of desert. Although the interior of the great Saära has not been fully explored, enough is known of it to prove that it contains large tracts of mountainous and hilly country, with rocks and valleys, lakes, rivers, and springs. There are, also, fertile spots, at wide distances from each other, covered with trees, and shrubs, and beautiful vegetation. Some of these spots are small, while others are of large extent, and inhabited by independent tribes, and even whole kingdoms of people. A fertile tract of this kind is called an oasis; and, by looking at your map, you will perceive that there are many oases in the Saära of Africa.

Of a similar character is the Great American Desert; but its surface is still more varied with what may be termed “geographical features.” There are plains—some of them more than a hundred miles wide—where you can see nothing but white sand, often drifting about on the wind, and here and there thrown into long ridges such as those made by a snowstorm. There are other plains, equally large, where no sand appears, but brown barren earth utterly destitute of vegetation. There are others, again, on which grows a stunted shrub with leaves of a pale silvery colour. In some places it grows so thickly, interlocking its twisted and knotty branches, that a horseman can hardly ride through among them. This shrub is the artemisia—a species of wild sage or wormwood,—and the plains upon which it grows are called by the hunters, who cross them, the sage prairies. Other plains are met with that present a black aspect to the traveller....