The Defence of Duffer's Drift 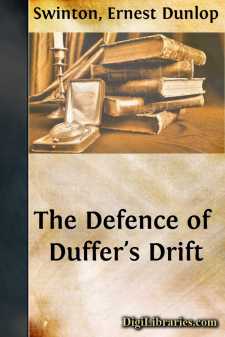 "Any fool can get into a hole."—Old Chinese proverb.

"If left to you, for defence make spades."—Bridge Maxim.

I felt lonely, and not a little sad, as I stood on the bank of the river near Duffer's Drift and watched the red dust haze, raised by the southward departing column in the distance, turn slowly into gold as it hung in the afternoon sunlight. It was just three o'clock, and here I was on the banks of the Silliaasvogel river, left behind by my column with a party of fifty N.C.O.'s and men to hold the drift. It was an important ford, because it was the only one across which wheeled traffic could pass for some miles up or down the river.

The river was a sluggish stream, not now in flood, crawling along at the very bottom of its bed between steep banks which were almost vertical, or at any rate too steep for wagons everywhere except at the drift itself. The banks from the river edge to their tops and some distance outwards were covered with dense thorn and other bushes, which formed a screen impenetrable to the sight. They were also broken by small ravines and holes, where the earth had been eaten away by the river when in flood, and were consequently very rough.

Some two thousand odd yards north of the drift was a flat-topped, rocky mountain, and about a mile to the northeast appeared the usual sugar-loaf kopje, covered with bushes and boulders—steep on the south, but gently falling to the north; this had a farm on the near side of it. About a thousand yards south of the drift was a convex and smooth hill, somewhat like an inverted basin, sparsely sown with small boulders, and with a Kaffir kraal, consisting of a few grass and mud huts on top. Between the river and the hills on the north the ground consisted of open and almost level veldt; on the south bank the veldt was more undulating, and equally open. The whole place was covered with ant-hills.

My orders were—to hold Duffer's Drift at all costs. That I should probably be visited by some column within three or four days' time. That I might possibly be attacked before that time, but that this was very unlikely, as no enemy were known to be within a hundred miles. That the enemy had guns.

It all seemed plain enough except that the true inwardness of the last piece of information did not strike me at the time. Though in company with fifty "good men and true," it certainly made me feel somewhat lonely and marooned to be left out there comparatively alone on the boundless veldt; but the chance of an attack filled me, and, I am quite sure, my men with martial ardor; and at last here was the chance I had so often longed for. This was my first "show," my first independent command, and I was determined to carry out my orders to the bitter end. I was young and inexperienced, it is true, but I had passed all my examinations with fair success; my men were a good willing lot, with the traditions of a glorious regiment to uphold, and would, I knew, do all I should require of them....