The Declaration of the Rights of Man and of Citizens 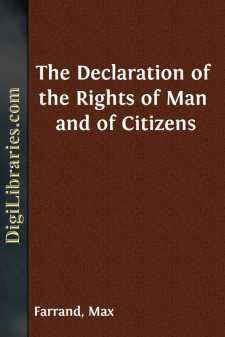 THE FRENCH DECLARATION OF RIGHTS OF AUGUST 26, 1789, AND ITS SIGNIFICANCE.

The declaration of "the rights of man and of citizens" by the French Constituent Assembly on August 26, 1789, is one of the most significant events of the French Revolution. It has been criticised from different points of view with directly opposing results. The political scientist and the historian, thoroughly appreciating its importance, have repeatedly come to the conclusion that the Declaration had no small part in the anarchy with which France was visited soon after the storming of the Bastille. They point to its abstract phrases as ambiguous and therefore dangerous, and as void of all political reality and practical statesmanship. Its empty pathos, they say, confused the mind, disturbed calm judgment, aroused passions, and stifled the sense of duty,—for of duty there is not a word. Others, on the contrary, and especially Frenchmen, have exalted it as a revelation in the world's history, as a catechism of the "principles of 1789" which form the eternal foundation of the state's structure, and they have glorified it as the most precious gift that France has given to mankind.

Less regarded than its historical and political significance is the importance of this document in the history of law, an importance which continues even to the present day. Whatever may be the value or worthlessness of its general phrases, it is under the influence of this document that the conception of the public rights of the individual has developed in the positive law of the states of the European continent. Until it appeared public law literature recognized the rights of heads of states, the privileges of class, and the privileges of individuals or special corporations, but the general rights of subjects were to be found essentially only in the form of duties on the part of the state, not in the form of definite legal claims of the individual. The Declaration of the Rights of Man for the first time originated in all its vigor in positive law the conception, which until then had been known only to natural law, of the personal rights of the members of the state over against the state as a whole. This was next seen in the first French constitution of September 3, 1791, which set forth, upon the basis of a preceding declaration of rights, a list of droits naturels et civils as rights that were guaranteed by the constitution. Together with the right of suffrage, the "droits garantis par la constitution", which were enumerated for the last time in the constitution of November 4, 1848, form to-day the basis of French theory and practice respecting the personal public rights of the individual. And under the influence of the French declaration there have been introduced into almost all of the constitutions of the other Continental states similar enumerations of rights, whose separate phrases and formulas, however, are more or less adapted to the particular conditions of their respective states, and therefore frequently exhibit wide differences in content.

In Germany most of the constitutions of the period prior to 1848 contained a section upon the rights of subjects, and in the year 1848 the National Constitutional Convention at Frankfort adopted "the fundamental rights of the German people", which were published on December 27, 1848, as Federal law....