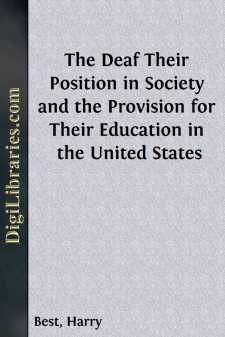 Society as a whole knows little of the deaf, or the so-called deaf and dumb. They do not form a large part of the population, and many people seldom come in contact with them. Their affliction to a great extent removes them from the usual avenues of intercourse with men and debars them from many of the social activities of life, all tending to make the deaf more or less a class apart in the community. They would seem, then, to have received separate treatment, as a section not wholly absorbed and lost in the general population, but in a measure standing out and differentiated from the rest of their kind. Thus it comes that society has to take notice of them. By reason of their condition certain duties are called forth respecting them, and certain provision has to be made for them.

The object of the present study of the deaf is to consider primarily the attitude of society or the state in America towards them, the duties it has recognized in respect to them, the status it has created for them, and the extent and forms, as well as the adequacy and correctness, of this treatment. Hence in our study of the problems of the deaf, the approach is not to be by the way of medicine, or of law, or of education, though all these aspects will be necessarily touched upon. Nor is our study to deal with this class as a problem of psychology or of mental or physical abnormality, though more or less consideration will have to be given to these points. Nor yet again are we to concern ourselves principally with what is known as the "human interest" question, though we should be much disappointed if there were not found an abundance of human interest in what we shall have to consider. Rather, then, we are to regard the deaf as certain components of the state who demand classification and attention in its machinery of organization. Our attitude is thus that of the social economist, and the object of our treatment is a part or section of the community in its relation to the greater and more solidified body of society.

More particularly, our purpose is twofold. We first consider the deaf, who they are, and their place in society, and then examine the one great form of treatment which the state gives, namely, the making of provision for their education. This we have attempted to do in two parts, Part I treating of the position of the deaf in society, and Part II of the provisions made for their education. As we shall find, the special care of the state for the deaf to-day has assumed practically this one form. Means of education are extended to all the state's deaf children, and with this its attention for the most part ceases. It has come to be seen that after they have received an education, they deserve or require little further aid or concern. But it has not always been the policy of the state to allow to the deaf the realization that they form in its citizenship an element able to look out for themselves, and demanding little of its special oversight. They have a story full of interest to tell, for the way of the deaf to the attainment of this position has been long and tortuous, being first looked upon as wards, and then by slow gradations coming to the full rights and responsibilities of citizenship....