The De Coverley Papers From 'The Spectator' 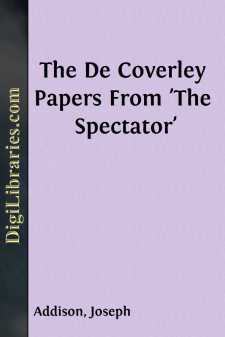 No character in our literature, not even Mr. Pickwick, has more endeared himself to successive generations of readers than Addison’s Sir Roger de Coverley: there are many figures in drama and fiction of whom we feel that they are in a way personal friends of our own, that once introduced to us they remain a permanent part of our little world. It is the abiding glory of Dickens, it is one of Shakespeare’s abiding glories, to have created many such: but we look to find these characters in the novel or the play: the essay by virtue of its limitations of space is unsuited for character-studies, and even in the subject of our present reading the difficulty of hunting the various Coverley Essays down in the great number of Spectator Papers is some small drawback. But here before the birth of the modern English novel we have a full-length portrait of such a character as we have described, in addition to a number of other more sketchy but still convincing delineations of English types. We are brought into the society of a fine old-fashioned country gentleman, simple, generous, and upright, with just those touches of whimsicality and those lovable faults which go straight to our hearts: and all so charmingly described that these Essays have delighted all who have read them since they first began to appear on the breakfast-tables of the polite world in Queen Anne’s day.

“Addison’s” Sir Roger we have called him, and be sure that honest Dick Steele, even if he drew the first outlines of the figure, would not bear us a grudge for so doing. Whoever first thought of Sir Roger, and however many little touches may have been added by other hands, he remains Addison’s creation: and furthermore it does not matter a snap of the fingers whether any actual person served as the model from which the picture was taken. Of all the bootless quests that literary criticism can undertake, this search for “the original” is the least valuable. The artist’s mind is a crucible which transmutes and re-creates: to vary the metaphor, the marble springs to life under the workman’s hands: we can almost see it happening in these Essays: and we know how often enough a writer finds his own creation kicking over the traces, as it were, and becoming almost independent of his volition. There is no original for Sir Roger or Falstaff or Mr. Micawber: they may not have sprung Athena-like fully armed out of the author’s head, and they may have been suggested by some one he had in mind. But once created they came into a full-blooded life with personalities entirely of their own.

A vastly more useful quest, one in fact of absorbing interest, is the attempt to follow the artist’s method, to trace the devices which he adopts to bring to our notice all those various traits by which we judge of character. The prose writer has this much advantage over the playwright, that he can represent his dramatis personæ in a greater number of different   situations, and furthermore can criticise them and draw our special attention to what he wishes to have stressed: he can even say that such and such thoughts and motives are in their minds. Not so the dramatist: his space is limited and he is cribbed, cabined, and confined by having to give a convincing imitation of real life, where we cannot tell what is going on in the minds of even our most intimate friends. Thus the audience is often left uncertain of the purport of what it sees and hears: the ugly and inartistic convention of the aside must be used very sparingly if the play is to ring true; and so it is that we shall find voluminous discussions on the subject, for instance, of how Shakespeare meant such and such a character to be interpreted. It stands to reason that the character in fiction can to this same extent be more artificial. It is a test of the self-control and artistic restraint of the novelist if he can refrain from diving too deep into the unknown and arrogating to himself an impossibly full knowledge of the mental processes of other people. And now notice how Addison gives us just such revelations of the old Knight’s character as the observant spectator would gather from friendly intercourse with him. We see Sir Roger at home, ruling his household and the village with a genial if somewhat autocratic sway: we see him in London, taking the cicerone who pilots him round Westminster Abbey for a monument of wit and learning: and so on and so forth....