The Day of the Confederacy; a chronicle of the embattled South 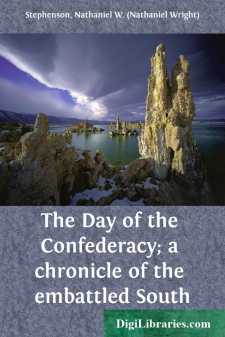 Chapter I. The Secession Movement

The secession movement had three distinct stages. The first, beginning with the news that Lincoln was elected, closed with the news, sent broadcast over the South from Charleston, that Federal troops had taken possession of Fort Sumter on the night of the 28th of December. During this period the likelihood of secession was the topic of discussion in the lower South. What to do in case the lower South seceded was the question which perplexed the upper South. In this period no State north of South Carolina contemplated taking the initiative. In the Southeastern and Gulf States immediate action of some sort was expected. Whether it would be secession or some other new course was not certain on the day of Lincoln's election. Various States earlier in the year had provided for conventions of their people in the event of a Republican victory. The first to assemble was the convention of South Carolina, which organized at Columbia, on December 17, 1860. Two weeks earlier Congress had met. Northerners and Southerners had at once joined issue on their relation in the Union. The House had appointed its committee of thirty-three to consider the condition of the country. So unpromising indeed from the Southern point of view had been the early discussions of this committee that a conference of Southern members of Congress had sent out their famous address To Our Constituents: "The argument is exhausted. All hope of relief in the Union... is extinguished, and we trust the South will not be deceived by appearances or the pretense of new guarantees. In our judgment the Republicans are resolute in the purpose to grant nothing that will or ought to satisfy the South. We are satisfied the honor, safety, and independence of the Southern people require the organization of a Southern Confederacy—a result to be obtained only by separate state secession." Among the signers of this address were the two statesmen who had in native talent no superiors at Washington—Judah P. Benjamin of Louisiana and Jefferson Davis of Mississippi.

The appeal To Our Constituents was not the only assurance of support tendered to the convention of South Carolina. To represent them at this convention the governors of Alabama and Mississippi had appointed delegates. Mr. Hooker of Mississippi and Mr. Elmore of Alabama made addresses before the convention on the night of the 17th of December. Both reiterated views which during two days of lobbying they had disseminated in Columbia "on all proper occasions." Their argument, summed up in Elmore's report to Governor Moore of Alabama, was "that the only course to unite the Southern States in any plan of cooperation which could promise safety was for South Carolina to take the lead and secede at once without delay or hesitation... that the only effective plan of cooperation must ensue after one State had seceded and presented the issue when the plain question would be presented to the other Southern States whether they would stand by the seceding State engaged in a common cause or abandon her to the fate of coercion by the arms of the Government of the United States."

Ten years before, in the unsuccessful secession movement of 1850 and 1851, Andrew Pickens Butler, perhaps the ablest South Carolinian then living, strove to arrest the movement by exactly the opposite argument....