The Dawn of Canadian History : A Chronicle of Aboriginal Canada 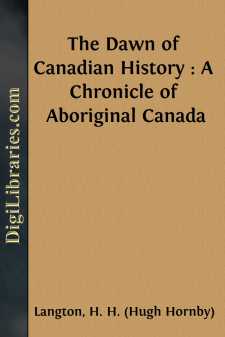 CHAPTER I BEFORE THE DAWN

We always speak of Canada as a new country. In one sense, of course, this is true. The settlement of Europeans on Canadian soil dates back only three hundred years. Civilization in Canada is but a thing of yesterday, and its written history, when placed beside the long millenniums of the recorded annals of European and Eastern peoples, seems but a little span.

But there is another sense in which the Dominion of Canada, or at least part of it, is perhaps the oldest country in the world. According to the Nebular Theory the whole of our planet was once a fiery molten mass gradually cooling and hardening itself into the globe we know. On its surface moved and swayed a liquid sea glowing with such a terrific heat that we can form no real idea of its intensity. As the mass cooled, vast layers of vapour, great beds of cloud, miles and miles in thickness, were formed and hung over the face of the globe, obscuring from its darkened surface the piercing beams of the sun. Slowly the earth cooled, until great masses of solid matter, rock as we call it, still penetrated with intense heat, rose to the surface of the boiling sea. Forces of inconceivable magnitude moved through the mass. The outer surface of the globe as it cooled ripped and shrivelled like a withering orange. Great ridges, the mountain chains of to-day, were furrowed on its skin. Here in the darkness of the prehistoric night there arose as the oldest part of the surface of the earth the great rock bed that lies in a huge crescent round the shores of Hudson Bay, from Labrador to the unknown wilderness of the barren lands of the Coppermine basin touching the Arctic sea. The wanderer who stands to-day in the desolate country of James Bay or Ungava is among the oldest monuments of the world. The rugged rock which here and there breaks through the thin soil of the infertile north has lain on the spot from the very dawn of time. Millions of years have probably elapsed since the cooling of the outer crust of the globe produced the solid basis of our continents.

The ancient formation which thus marks the beginnings of the solid surface of the globe is commonly called by geologists the Archaean rock, and the myriads of uncounted years during which it slowly took shape are called the Archaean age. But the word 'Archaean' itself tells us nothing, being merely a Greek term meaning 'very old.' This Archaean or original rock must necessarily have extended all over the surface of our sphere as it cooled from its molten form and contracted into the earth on which we live. But in most places this rock lies deep under the waters of the oceans, or buried below the heaped up strata of the formations which the hand of time piled thickly upon it. Only here and there can it still be seen as surface rock or as rock that lies but a little distance below the soil. In Canada, more than anywhere else in the world, is this Archaean formation seen. On a geological map it is marked as extending all round the basin of Hudson Bay, from Labrador to the shores of the Arctic....