The Dawn of Amateur Radio in the U.K. and Greece: a personal view 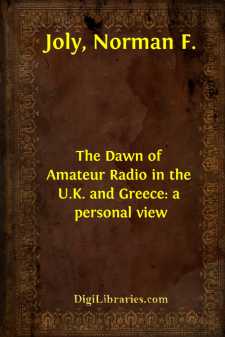 CHAPTER ONE THE DEVELOPMENT OF ELECTRICITY

The phenomenon which Thales had observed and recorded five centuries before the birth of Christ aroused the interest of many scientists through the ages. They made various practical experiments in their efforts to identify the elusive force which Thales had likened to a 'soul' and which we now know to have been static electricity.

Of all forms of energy, electricity is the most baffling and difficult to describe. An electric current cannot be seen. In fact it does not exist outside the wires and other conductors which carry it. A live wire carrying a current looks exactly the same and weighs exactly the same as it does when it is not carrying a current. An electric current is simply a movement or flow of electrons.

Benjamin Franklin, the American statesman and scientist born in Boston in 1706, investigated the nature of thunder and lightning by flying a child's kite during a thunderstorm. He had attached a metal spike to the kite, and at the other end of the string to which the kite was tied he secured a key. As the rain soaked into the string, electricity flowed freely down the string and Franklin was able to draw large sparks from the key. Of course this could have been very dangerous, but he had foreseen it and had supported the string through an insulator. He observed that this electricity had the same properties as the static electricity produced by friction.

But long before Franklin many other scientists had carried out research into the nature of electricity.

In England William Gilbert (1544-1603) had noticed that the powers of attraction and repulsion of two non-metallic rods which he had rubbed briskly were similar to those of lodestone and amber—they had acquired the curious quality we call magnetism. Remembering Thales of old he coined the word 'electricity'.

Otto von Guericke (1602-1686) a Mayor of Magdeburg in Germany, was an amateur scientist who had constructed all manner of gadgets. One of them was a machine consisting of two glass discs revolving in opposite directions which produced high voltage charges through friction. Ramsden and Wimshurst built improved versions of the machine.

A significant breakthrough occurred when Alessandro Volta (1745-1827) in Italy constructed a simple electric cell (in 1799) which produced a flow of electrons by chemical means. Two plates, one of copper and the other of zinc, were placed in an acid solution and a current flowed through an external wire connecting the two plates. Later he connected cells in series (voltaic pile) which consisted of alternate layers of zinc and copper discs separated by flannel discs soaked in brine or acid which produced a higher electric pressure (voltage). But Volta never found the right explanation of why his cell was working. He thought the flow of electric current was due to the contact between the two metals, whereas in fact it results from the chemical action of the electrolyte on the zinc plate. However, his discovery proved to be of incalculable value in research, as it enabled scientists to carry out experiments which led to the discoveries of the heating, lighting, chemical and magnetic effects of electricity....