The Dawn and the Day Or, The Buddha and the Christ, Part I 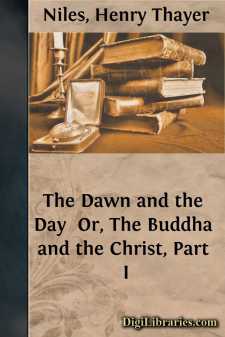 The golden age—when men were brothers all,  The golden rule their law and God their king;  When no fierce beasts did through the forests roam,  Nor poisonous reptiles crawl upon the ground;  When trees bore only wholesome, luscious fruits,  And thornless roses breathed their sweet perfumes;  When sickness, sin and sorrow were unknown,  And tears but spoke of joy too deep for words;  When painless death but led to higher life,  A life that knows no end, in that bright world  Whence angels on the ladder Jacob saw,  Descending, talk with man as friend to friend—  That age of purity and peace had passed,  But left a living memory behind,  Cherished and handed down from sire to son  Through all the scattered peoples of the earth,  A living prophecy of what this world,  This sad and sinful world, might yet become.

The silver age—an age of faith, not sight—  Came next, when reason ruled instead of love;  When men as through a glass but darkly saw  What to their fathers clearly stood revealed  In God's own light of love-illumined truth,  Of which the sun that rising paints the east,  And whose last rays with glory gild the west,  Is but an outbirth. Then were temples reared,  And priests 'mid clouds of incense sang His praise  Who out of densest darkness called the light,  And from His own unbounded fullness made  The heavens and earth and all that in them is.  Then landmarks were first set, lest men contend  For God's free gifts, that all in peace had shared.  Then laws were made to govern those whose sires  Were laws unto themselves. Then sickness came,  And grief and pain attended men from birth to death.  But still a silver light lined every cloud,  And hope was given to cheer and comfort men.

The brazen age, brilliant but cold, succeeds.  This was an age of knowledge, art and war,  When the knights-errant of the ancient world,  Adventures seeking, roamed with brazen swords  Which by a wondrous art—then known, now lost—  Were hard as flint, and edged to cut a hair  Or cleave in twain a warrior armor-clad  And armed with shields adorned by Vulcan's art,  Wonder of coming times and theme for bards.[1]  Then science searched through nature's heights and depths.  Heaven's canopy thick set with stars was mapped,  The constellations named, and all the laws searched out  That guide their motions, rolling sphere on sphere.[2]  Then men by reasonings piled up mountain high  Thought to scale heaven, and to dethrone heaven's king,  Whose imitators weak, with quips and quirks  And ridicule would now destroy all sacred things.  This age great Homer and old Hesiod sang,  And gods they made of hero, artist, bard.

At length this twilight of the ages fades,  And starless night now sinks upon the world—  An age of iron, cruel, dark and cold.  On Asia first this outer darkness fell,  Once seat of paradise, primordial peace,  Perennial harmony and perfect love....