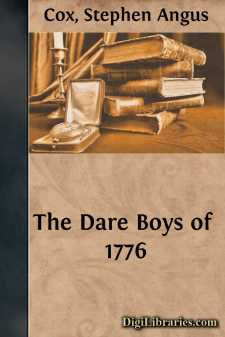 Chapter I The Clang of the Liberty Bell

It was the fourth day of July of the year 1776. There was great excitement in all of the colonies of America at that time, for on this day the representatives of the people, gathered together in the city of Philadelphia, were to decide whether the Declaration of Independence, already drawn up, should be adopted and signed. In Philadelphia, as may well be supposed, the excitement was so intense that the people suspended business. They thronged the streets, walking up and down, talking excitedly, and waiting, waiting for the decision to be made, the determination that would mean so much to them.

The people talked and gesticulated, and there was considerable arguing, some contending that the Declaration of Independence would be adopted and signed, others that it would not.

“Look, here it is almost evening,” contended one of these latter, “and nothing has been done yet. If they were going to adopt the Declaration it would have been done before this. The delay means that it will not be done.”

“They are taking their time to it, that is all,” replied the others. “It is a most serious matter and not to be taken up hastily and without due thought. They will adopt and sign the Declaration of Independence before the day is gone, see if they don't!”

Dick and Tom Dare, two patriot youths, brothers, from about three miles over in New Jersey, who had come to the city to hear the news, listening eagerly, were thrilled by the excitement and interest shown on every side.

“Oh, I hope they will adopt the Declaration of Independence, Dick!” said Tom. “I'm sure they will, aren't you?”

“Bah, they won't do nothin' uv the kind, Dick Dare!” cried a sneering voice at their side, and turning, the Dare youths saw Zeke Boggs and Lem Hicks, the sons of two Tory neighbors, standing there.

“Uv course they won't,” added Lem Hicks. “They don't darst. They know that ef they do, they'll git into trouble with King George. They won't ring no old Liberty Bell to-day.”

“Well, they just will!” cried Tom Dare, who was an excitable, impulsive youth. “They'll ring it pretty soon, Lem Hicks, and they aren't afraid of your old king, not a bit of it!”

Instantly Dick Dare, who was the elder of the brothers, a handsome, manly youth of eighteen years, seized Zeke by the wrist, and pushed him back, at the same time saying quietly, yet firmly:

“That will do, Zeke. Don't go making any threats. You and Lem go about your business, and don't interfere with Tom and I.”

“We'll go where we please,” snarled Zeke, who was a vicious youth of about Dick's age, as was Lem Hicks also. “An' we'll stay heer ef we want to, too, Dick Dare, an' ye can't he'p yerself.”

“That's all right,” calmly; “you can stay here, I suppose, if you want to, but you will have to behave yourselves and attend to your own business....