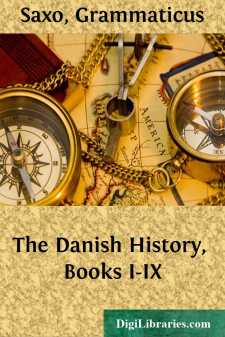 Of Saxo little is known but what he himself indicates, though much doubtful supposition has gathered round his name.

That he was born a Dane his whole language implies; it is full of a glow of aggressive patriotism. He also often praises the Zealanders at the expense of other Danes, and Zealand as the centre of Denmark; but that is the whole contemporary evidence for the statement that he was a Zealander. This statement is freely taken for granted three centuries afterwards by Urne in the first edition of the book (1514), but is not traced further back than an epitomator, who wrote more than 200 years after Saxo's death. Saxo tells us that his father and grandfather fought for Waldemar the First of Denmark, who reigned from 1157 to 1182. Of these men we know nothing further, unless the Saxo whom he names as one of Waldemar's admirals be his grandfather, in which case his family was one of some distinction and his father and grandfather probably "King's men". But Saxo was a very common name, and we shall see the licence of hypothesis to which this fact has given rise. The notice, however, helps us approximately towards Saxo's birth-year. His grandfather, if he fought for Waldemar, who began to reign in 1157, can hardly have been born before 1100, nor can Saxo himself have been born before 1145 or 1150. But he was undoubtedly born before 1158, since he speaks of the death of Bishop Asker, which took place in that year, as occurring "in our time". His life therefore covers and overlaps the last half of the twelfth century.

His calling and station in life are debated. Except by the anonymous Zealand chronicler, who calls him Saxo "the Long", thus giving us the one personal detail we have, he has been universally known as Saxo "Grammaticus" ever since the epitomator of 1431 headed his compilation with the words, "A certain notable man of letters ("grammaticus"), a Zealander by birth, named Saxo, wrote," etc. It is almost certain that this general term, given only to men of signal gifts and learning, became thus for the first time, and for good, attached to Saxo's name. Such a title, in the Middle Ages, usually implied that its owner was a churchman, and Saxo's whole tone is devout, though not conspicuously professional.

But a number of Saxos present themselves in the same surroundings with whom he has been from time to time identified. All he tells us himself is, that Absalon, Archbishop of Lund from 1179 to 1201, pressed him, who was "the least of his companions, since all the rest refused the task", to write the history of Denmark, so that it might record its glories like other nations. Absalon was previously, and also after his promotion, Bishop of Roskild, and this is the first circumstance giving colour to the theory—which lacks real evidence—that Saxo the historian was the same as a certain Saxo, Provost of the Chapter of Roskild, whose death is chronicled in a contemporary hand without any mark of distinction. It is unlikely that so eminent a man would be thus barely named; and the appended eulogy and verses identifying the Provost and the historian are of later date....