The Dakotan Languages, and Their Relations to Other Languages

by A. W. (Andrew Woods) Williamson 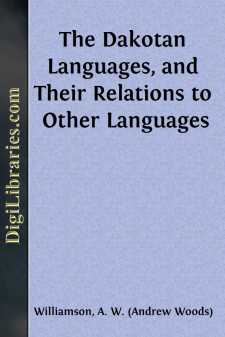 To the ethnologist and to the philologist the Dakotas and those speaking kindred languages are a very interesting people. There are four principal Dakota dialects, the Santee, Yankton, Assinniboin and Titon. The allied languages may be divided into three groups:

III. a, Minnetaree (Minitari) or Hidatsa; b, Absauraka, or Crow.

Pawnee and Aricaree seem also to be somewhat related.

In my father's opinion the Dakota dialects differ about as much as the Greek dialects did in the time of Homer, and the Assinniboin is much nearer to the Yankton dialect of which it is an offshoot than is the Titon. Judging by the vocabularies to which I have access chiefly in Hayden's "Indian tribes of the Missouri," I would suppose the first group to differ from the Dakota about as much as the German from the English, and to differ among themselves somewhat as Hollandish, Friesian, and English. The Mandan appears to be separated much more widely from them than they are from each other. The Minnetaree and Crow constitute a distinct group diverging from each other more than the Santee and Titon, the extreme dialects of the Dakota. They show more resemblance to the Mandan than to any other one of the class, but diverge very widely from it. But very few words approximate identity. About one half of the words in Matthew's Hidatsa dictionary appear to me to be in part at least composed of material related to the Dakota, and about five per cent to fairly represent Dakota words. Many of these show little similarity except as compared in the light of sound representation.

When first discovered the Dakotas and Assinniboins were nomads, living almost entirely by hunting and fishing. The Dakotas, then probably less than ten thousand, are now more than thirty thousand in number. There are probably about three thousand Assinniboins. The allied tribes, except the Crows, when first found lived chiefly by agriculture. They have during the last hundred years rapidly diminished in numbers, and do not number over twelve thousand including the Crows.

All of the Dakotan tribes and some others formerly made and baked pottery similar to that found in the mounds of the Ohio valley. The Osages and some others lived in earth houses, whose ruins are similar to those of the houses of the mound builders. The Minnetarees, Mandans and Aricarees still live in houses of the same kind, and make and bake pottery. Measurements indicate that the crania of the Dakotas in size of brain and angle decidedly approach the European form. The cheek bones of the Dakotas are much less prominent than those of the Chippewas, and those one-fourth Chippewa and three-fourths white have on an average darker complexions than those half white and half Dakota. Among the Minnetarees and Mandans are many persons of light hair, blue eyes, and tolerably fair complexion, not attributable to an infusion of Caucasian blood since the time of Columbus.

No people take more pains to speak their language accurately than the Dakotas. Their social condition is similar to that of the Arabs, whose language has within historic observation changed more slowly than any other. The Assinniboins have been separated from the Dakotas about three centuries, perhaps a little less, possibly much more....