The Curlytops on Star Island or Camping out with Grandpa 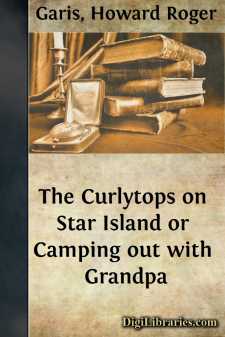 "I'm not doing anything at all, Mother!"

"You are so, Theodore Baradale Martin; and you've just got to stop!"

Janet, or Jan, as she was more often called, stood in front of her brother with flashing eyes and red cheeks.

"Children! Children! What are you doing now?" asked their mother, appearing in the doorway of the big, white farmhouse, holding in her arms a small boy. "Please don't make so much noise. I've just gotten Baby William to sleep, and if he wakes up——"

"Yes, don't wake up Trouble, Jan," added Theodore, or Ted, the shorter name being the one by which he was most often called. "If you do he'll want to come with us, and we can't make Nicknack race."

"I wasn't waking him up, it was you!" exclaimed Jan. "He keeps pulling my doll's legs, Mother and——"

"Well, I'm pretending she has, so there, Ted Martin! And if you don't stop——"

"There now, please stop, both of you, and be nice," begged Mrs. Martin. "I thought, since you had your goat and wagon, you could play without having so much fuss. But, if you can't——"

"Oh, we'll be good!" exclaimed Ted, running his hands through his tightly curling hair, but not taking any of the kinks out that way. "We'll be good. I won't tease Jan anymore."

"You'd better not!" warned his sister, and, though she was a year younger than Ted, she did not seem at all afraid of him. "If you do I'll take my half of the goat away and you can't ride."

"Pooh! Which is your half?" asked Ted.

"The wagon. And if you don't have the wagon to hitch Nicknack to, how're you going to ride?"

"Huh! I could ride on his back. Take your old wagon if you want to, but if you do——"

"The-o-dore!" exclaimed his mother in a slow, warning voice, and when he heard his name spoken in that way, with each syllable pronounced separately, Ted knew it was time to haul down his quarreling colors and behave. He did it this time.

"And I won't take the goat-wagon away. We'll both go for a ride in it."

"That's the way to have a good time," said Mrs. Martin, with a smile. "Now don't make any more noise, for William is fussy. Run off and play now, but don't go too far."

"We'll go for a ride," said Teddy. "Come on, Jan. You can let your doll make-believe drive the goat if you want to."

"Thank you, Teddy. But I guess I'd better not. I'll pretend she's a Red Cross nurse and I'm taking her to the hospital to work."

"Then we'll make-believe the goat-wagon is an ambulance!" exclaimed Ted. "And I'm the driver and I don't mind the big guns. Come on, that'll be fun!"

Filled with the new idea, the two children hurried around the side of the farmhouse out toward the barn where Nicknack, their pet goat, was kept....