The Curlytops and Their Playmates or Jolly Times Through the Holidays 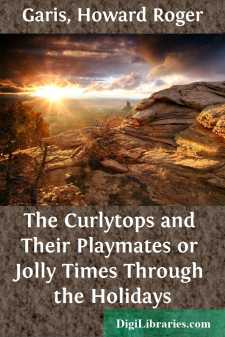 "Oh, pretty soon now, I guess. We're all ready for it when it does come," and Ted Martin glanced from where he sat over toward a slanting hill made of several long boards nailed to some tall packing boxes. The boxes were piled high at one end, and on top was a little platform, reached by some steps made of smaller boxes.

"It's a good while coming though, isn't it, Ted?" asked his sister Janet, looking up toward the sky.

"Yes, I wish it would hurry," said the boy, giving his cap a twist, thereby making more of a tangle than ever the curly, golden hair that had given him and Janet the nicknames of "Curlytops."

The two children walked around the wooden structure which they had built, with the help of Tom and Lola Taylor, their playmates, after much hard work in hammering, pounding, and the straightening of crooked nails. Now and then Ted and Janet turned their faces to the gray clouds which floated above them.

"I wish it would hurry!" murmured Janet.

There was a sudden chorus of shouts and laughter coming from around the corner of the house, and another boy and girl rushed up the path.

"What you looking for, Ted?" asked Tom. "An airship?" for Ted's eyes were again turned toward the clouds.

"Or maybe birds," added Lola, with a laugh. "Are you watching to see some of the birds fly south, because it's soon going to be winter? Are you, Ted?"

"Nope!" as the answer. "I'm looking to see when it's going to snow. Mother said a snowstorm was coming, and I'm watching for the first flakes. What's the good of a toboggan slide when there isn't any snow?"

"That's right," chimed in Tom Taylor. "Now we have this toboggan slide made, we want some snow or else we can't ride down on it."

That is what the wooden structure in the yard of the Curlytops was—a toboggan slide. Tom and Ted, with the help of some other boys and the aid of a few jolly girls, who brought up boards and boxes (though they couldn't drive the nails straight) had, after much hard work, built up a sort of toboggan slide.

Now all that was needed was snow so they could ride down it on their sleds, for none of the children had toboggans—those queer, low, flat sleds, all of wood, with the round curved piece in front.

A pile of big packing boxes fastened together made the high part of the slide. To get to the top of this pile one had to climb on a number of smaller boxes arranged in the form of steps—and crazy, tottering steps they were, but the children didn't mind it. It was all the more fun when they nearly fell down in climbing up.

From the top of the high pile of big boxes there sloped down a hill of boards, nailed in some places and in others fastened together with ropes to make an incline, or hill. This was about twenty feet long, and ended in a little upturn so that a sled would shoot up with a jerk and come down with a bang. More fun!

After several days of hard work the toboggan slide had been finished, and now, as Ted remarked, all they needed was some snow to fall, to cover the incline and make it slippery enough for the sleds to glide down.

But where was the snow? The gray clouds floating high in the air seemed to promise a fall of the white flakes, but though the Curlytops and their playmates, the Taylor children, strained their eyes and made their necks ache looking up, not a feathery crystal did they see.

"Maybe if we whistled it would do some good," said Janet, as all four sat in rather gloomy silence.

"Whistle for what?" asked Ted, throwing a stick for Skyrocket, his dog, to race after, a game that Skyrocket was very glad to play.