The Curlytops and Their Pets or Uncle Toby's Strange Collection 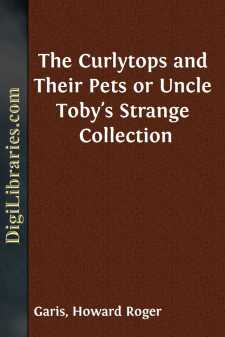 "What you going to put on your ship, Ted?"

"Oh, swords and guns and gunpowder and soldiers. What you going to load on your ship, Jan?"

"Oranges and lemons and pineapples," answered the little girl, who was playing with her brother at sailing boats in the brook that ran back of the house. "And maybe I'll have gold and diamonds and chocolate cake on my ship, Teddy," went on Janet Martin.

Teddy Martin jumped up so suddenly from the bank of the brook, where he was loading his ship with what he called "swords, guns and gunpowder," that he tipped the vessel over and the whole cargo was spilled into the water.

"Oh, look what you did!" cried Janet. "Your gunpowder will be all wet!"

"I'm not ready to play the pirate game yet," explained Teddy. "Anyhow, I can get more powder."

This would be easy enough, it seemed, as the children were only pretending that stones, pebbles and bits of sticks were the cargoes of their toy ships, and, as Teddy had said, he could easily get more stones. The brook was filled with them.

"Where are you going?" Janet called after her brother, as she saw him hurrying toward the house, which was out of sight behind the trees and bushes that grew on the edge of the brook.

"I'm going to get a black flag so I can be a pirate and sink your ship with gold, diamonds and chocolate cakes on!" answered Teddy over his shoulder as he ran on.

But her brother was beyond the reach of her voice now, hurrying toward the house after his "black pirate flag." Janet shoved her ship out from the shore—her ship laden with diamonds, gold and chocolate cakes. Of course it was not a real ship. The Curlytops would not have had half as much fun with real ships as they were having with the pieces of boards which they were making believe were steamers and sailing vessels.

"I'll sail my ship away down to the end of the brook before Ted gets back to be a pirate," said Janet to herself, as, with a long stick, she directed the flat board which was piled high with brook-pebbles. "Then when he comes back he can't sink it."

Janet pushed her ship slowly at first, and then a little faster, moving it along by means of the stick while she stood on the bank. Then, hearing a noise in the bushes behind her, she thrust harder on the stick.

"I don't want Teddy to pirate my ship!" she thought. "I'll fool him! I'll sail it around the bend, and then I'll hide behind the big buttonball tree and he won't know where I've gone!"

In order to do this Janet wanted to make her ship go as fast as possible, so she shoved harder and harder on the stick. And then, all of a sudden, her ship upset.

With a splash the stones, pebbles and bits of wood went into the brook....