The Curious Book of Birds 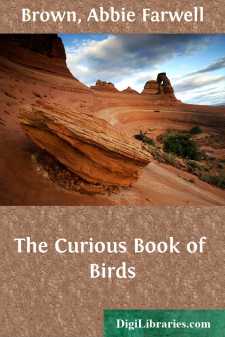 ONG, long ago, at the beginning of things, they say that the Lord made the world smooth and round like an apple. There were no hills nor mountains: nor were there any hollows or valleys to hold the seas and rivers, fountains and pools, which the world of men would need. It must, indeed, have been a stupid and ugly earth in those days, with no chance for swimming or sailing, rowing or fishing. But as yet there was no one to think anything about it, no one who would long to swim, sail, row, and fish. For this was long before men were created.

The Lord looked about Him at the flocks of newly made birds, who were preening their wings and wondering at their own bright feathers, and said to Himself,—

"I will make these pretty creatures useful, from the very beginning, so that in after time men shall love them dearly. Come, my birds," He cried, "come hither to me, and with the beaks which I have given you hollow me out here, and here, and here, basins for the lakes and pools which I intend to fill with water for men and for you, their friends. Come, little brothers, busy yourselves as you would wish to be happy hereafter."

Then there was a twittering and fluttering as the good birds set to work with a will, singing happily over the work which their dear Lord had given them to do. They pecked and they pecked with their sharp little bills; they scratched and they scratched with their sharp little claws, till in the proper places they had hollowed out great basins and valleys and long river beds, and little holes in the ground.

Then the Lord sent great rains upon the earth until the hollows which the birds had made were filled with water, and so became rivers and lakes, little brooks and fountains, just as we see them to-day. Now it was a beautiful, beautiful world, and the good birds sang happily and rejoiced in the work which they had helped, and in the sparkling water which was sweet to their taste.

All were happy except one. The Woodpecker had taken no part with the other busy birds. She was a lazy, disobedient creature, and when she heard the Lord's commands she had only said, "Tut tut!" and sat still on the branch where she had perched, preening her pretty feathers and admiring her silver stockings. "You can toil if you want to," she said to the other birds who wondered at her, "but I shall do no such dirty work. My clothes are too fine."

Now when the world was quite finished and the beautiful water sparkled and glinted here and there, cool and refreshing, the Lord called the birds to Him and thanked them for their help, praising them for their industry and zeal. But to the Woodpecker He said,—

"As for you, O Woodpecker, I observe that your feathers are unruffled by work and that there is no spot of soil upon your beak and claws. How did you manage to keep so neat?"

The Woodpecker looked sulky and stood upon one leg.

"It is a good thing to be neat," said the Lord, "but not if it comes from shirking a duty. It is good to be dainty, but not from laziness....