The Cruise of the Dainty Rovings in the Pacific 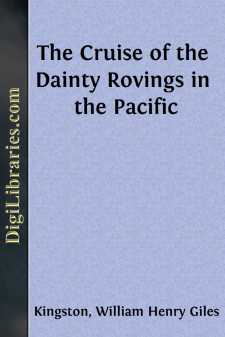 “Never was bothered with a more thorough calm!” exclaimed my brother Harry, not for the first time that morning, as he and I, in spite of the sweltering heat, paced the deck of our tight little schooner the Dainty, then floating motionless on the smooth bosom of the broad Pacific. The empty sails hung idly from the yards. The dog-vanes imitated their example. Not the tiniest wavelet disturbed the shining surface of the ocean, not a cloud dimmed the intense blue of the sky, from which the sun glared forth with a power that made the pitch in the seams of the deck bubble up and stick to the soles of our feet, and though it might have failed to cook a beefsteak in a satisfactory manner, was rapidly drying some strings of fish hung up in the rigging.

The white men of the crew were gathered forward, in such shade as they could find, employed under the superintendence of Tom Platt, our mate, in manufacturing mats, sinnet, rope yarns, or in knotting and splicing; the dark-skinned natives, of whom we had several on board similarly engaged, were mostly on the other side of the deck, apparently indifferent as to whether they were in the shade or sunshine. Even my brother, the commander of the Dainty, was too impatient to think much about the broiling we were undergoing, as we walked from the taffrail to a short distance before the mainmast, where we invariably turned to face back again; while during the intervals in our conversation, from an old habit, he whistled vehemently for a breeze, not that in consequence he really expected it to come.

As we walked with our faces forward I was amused by watching old Tom, who, marline-spike in hand, was stropping a block, now inspecting the work of one man, now that of another, and then giving his attention to a lad, seated on the spars stowed under the long-boat, engaged in splicing an eye to the end of a rope.

“Ay, t’will do, Dick—wants scraping a bit; let’s see how you’ll serve it,” answered old Tom, giving back the rope.

After taking a few more turns my brother stopped. “Do you think, Platt, that, we shall be long delayed by this provoking calm?” he asked.

“Can’t say, Cap’en. Known such to last for the better part of a week in these latitudes,” answered the mate, coming a few steps aft. “Maybe, though, we’ll get a breeze to-morrow, maybe not.”

“We are not likely to get it yet, at all events, from the look of the sky,” said Harry. “We’ll rig the awning and persuade Mary and Fanny to come on deck. They’ll be better here than in the close cabin.” Just as he spoke Nat Amiel, his young brother-in-law, appeared at the companion-hatch.

“Wanted to see if you were asleep, as we have been below all the morning,” he exclaimed. “Well, I declare, it is hot, though it’s baking enough in the cabin to satisfy a salamander.”

“We’ll soon have some more shade, and then ask the ladies to come on deck and enjoy it,” I answered....