The Critics Versus Shakspere A Brief for the Defendant 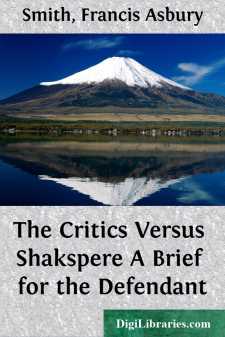 Many years ago, I was retained in the great case of The Critics against Shakspere, the most celebrated on the calendar of history during three centuries. Unlike other cases, it has been repeatedly decided, and as often reopened and reheard before the most eminent judges, who have again and again non-suited the plaintiffs. Appeals have availed nothing to reverse those decisions. New actions have been brought on the ground of newly discovered evidence; counsel have summed up the testimony from all lands, from whole libraries and literatures, and the great jury of mankind have uniformly rendered a verdict of no cause of action.

Ben Jonson said that Shakspere "wanted art"; the highest appellate court decided that "Lear" was a greater work than Euripides or Sophocles ever produced. Voltaire, the presiding Justice in the court of French criticism, decided that Shakspere was "votre bizarre sauvage;" the world has reversed his decision, and everywhere, except perhaps in France, the "Henriade" is neglected for "Hamlet."

During the seventeenth century, English criticism sought to put Beaumont and Fletcher, Massinger, Otway, Wycherly, Congreve, Cowley, Dryden, and even the madman Lee, above Shakspere. Denham in 1667 sings an obituary to the memory of the "immortal" Cowley,—

"By Shakspere's, Jonson's, Fletcher's lines,Our stage's lustre Rome's outshines. Old Mother Wit and Nature gaveShakspere and Fletcher all they have;In Spencer and in Jonson, artOf slower Nature got the start.But both in him so equal are,None knows which bears the happiest share."

One knows not which to admire most, the beauty of the poetry or the justice of the encomium.

James Shirly, whom Shakspere has not yet been accused of imitating, said in 1640 that he had few friends, and Tateham, an obscure versifier, in 1652, that he was the "plebeian driller."

Philipps, the pupil of Milton, refers to Shakspere's "unfiled expressions, his rambling and undigested fancies, the laughter of the critical." Dryden "regretted that Shakspere did not know or rarely observed the Aristotelian laws of the three unities," but was good enough to express his surprise at the powerful effect of his plays. "He is many times flat, insipid, his comic wit degenerating into clenches, his serious swelling, into bombast."

John Dennis and Charles Gildon, whose books are forgotten under the dust of more than two centuries, in 1693 and 1694 denied that Shakspere's plays had any excellence, any wealth in profound sentences or truth to nature, any originality, force or beauty of diction; and placed him far below the ancients in all essential points,—in composition, invention, characterization.

Dennis says Shakspere paid no heed to poetic justice ... "the good and bad perishing promiscuously in the best of his tragedies, so that there can be either none or very weak instruction in them." Gildon sums up his opinion by the sententious remark that "his beauties are buried beneath a heap of ashes, isolated and fragmentary like the ruins of a temple, so that there is no harmony in them."

Against all this arraignment by the imitators of the French drama, we have that loving tribute of the great Milton:—

"Dear son of memory, great heir of fame,What need'st thou such weak witness of thy Name....
Show more
Show less