The Critical Period of American History 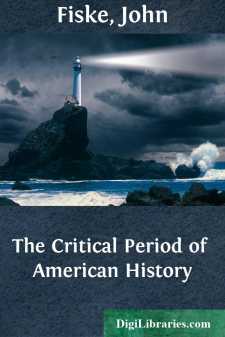 RESULTS OF YORKTOWN. Sympathy between British Whigs and the revolutionary party in America.

The 20th of March, 1782, the day which witnessed the fall of Lord North's ministry, was a day of good omen for men of English race on both sides of the Atlantic. Within two years from this time, the treaty which established the independence of the United States was successfully negotiated at Paris; and at the same time, as part of the series of events which resulted in the treaty, there went on in England a rapid dissolution and reorganization of parties, which ended in the overwhelming defeat of the king's attempt to make the forms of the constitution subservient to his selfish purposes, and established the liberty of the people upon a broader and sounder basis than it had ever occupied before. Great indignation was expressed at the time, and has sometimes been echoed by British historians, over the conduct of those Whigs who never lost an opportunity of expressing their approval of the American revolt. The Duke of Richmond, at the beginning of the contest, expressed a hope that the Americans might succeed, because they were in the right. Charles Fox spoke of General Howe's first victory as "the terrible news from Long Island." Wraxall says that the celebrated buff and blue colours of the Whig party were adopted by Fox in imitation of the Continental uniform; but his unsupported statement is open to question. It is certain, however, that in the House of Commons the Whigs habitually alluded to Washington's army as "our army," and to the American cause as "the cause of liberty;" and Burke, with characteristic vehemence, declared that he would rather be a prisoner in the Tower with Mr. Laurens than enjoy the blessings of freedom in company with the men who were seeking to enslave America. Still more, the Whigs did all in their power to discourage enlistments, and in various ways so thwarted and vexed the government that the success of the Americans was by many people ascribed to their assistance. A few days before Lord North's resignation, George Onslow, in an able defence of the prime minister, exclaimed, "Why have we failed so miserably in this war against America, if not from the support and countenance given to rebellion in this very House?"

It weakened the Whigs in England. Character of Lord Shelburne.

Now the violence of party leaders like Burke and Fox owed much of its strength, no doubt, to mere rancorousness of party spirit. But, after making due allowance for this, we must admit that it was essentially based upon the intensity of their conviction that the cause of English liberty was inseparably bound up with the defeat of the king's attempt upon the liberties of America. Looking beyond the quarrels of the moment, they preferred to have freedom guaranteed, even at the cost of temporary defeat and partial loss of empire. Time has shown that they were right in this, but the majority of the people could hardly be expected to comprehend their attitude. It seemed to many that the great Whig leaders were forgetting their true character as English statesmen, and there is no doubt that for many years this was the chief source of the weakness of the Whig party....