The Critic in the Orient 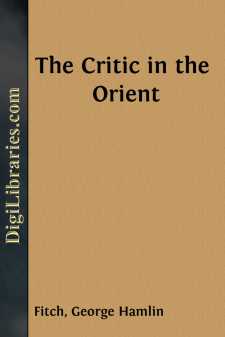 This book of impressions of the Far East is called "The Critic in the Orient," because the writer for over thirty years has been a professional critic of new books—one trained to get at the best in all literary works and reveal it to the reader. This critical work—a combination of rapid reading and equally rapid written estimate of new publications—would have been deadly, save for a love of books, so deep and enduring that it has turned drudgery into pastime and an enthusiasm for discovering good things in every new book which no amount of literary trash was ever able to smother.

After years of such strenuous critical work, the mind becomes molded in a certain cast. It is as impossible for me to put aside the habit of the literary critic as it would be for a hunter who had spent his whole life in the woods to be content in a great city. So when I started out on this trip around the world the critical apparatus which I had used in getting at the heart of books was applied to the people and the places along this great girdle about the globe.

Much of the benefit of foreign travel depends upon the reading that one has done. For years my eager curiosity about places had led me to read everything printed about the Orient and the South Seas. Add to this the stories which were brought into a newspaper office by globe trotters and adventurers, and you have an equipment which made me at times seem to be merely revising impressions made on an earlier journey. When you talk with a man who has spent ten or twenty years in Japan or China or the Straits Settlements, you cannot fail to get something of the color of life in those strange lands, especially if you have the newspaper training which impels you to ask questions and to drag out of your informant everything of human interest that the reader will care to know.

This newspaper instinct, which is developed by training but which one must possess in large measure before he can be successful in journalism, seizes upon everything and transmutes it into "copy" for the printer. To have taken this journey without setting down every day my impressions of places and people would have been a tiresome experience. What seemed labor to others who had not had my special training was as the breath in my nostrils. Even in the debilitating heat of the tropics it was always a pastime, never a task, to put into words my ideas of the historic places which I knew so well from years of reading and which I had just seen. And the richer the background of history, the greater was my enjoyment in painting with words full of color a picture of my impressions, for the benefit of those who were not able to share my pleasure in the actual sight of these famous places of the Far East.

From the mass of newspaper letters written while every impression was sharp and clear, I have selected what seemed to me most significant and illustrative. It is only when the traveler looks back over a journey that he gets the true perspective. Then only is he able to see what is of general and permanent interest....