The Crisis in Russia 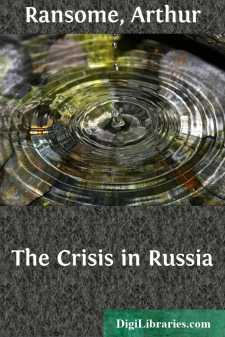 THE characteristic of a revolutionary country is that change is a quicker process there than elsewhere. As the revolution recedes into the past the process of change slackens speed. Russia is no longer the dizzying kaleidoscope that it was in 1917. No longer does it change visibly from week to week as it changed in 19l8. Already, to get a clear vision of the direction in which it is changing, it is necessary to visit it at intervals of six months, and quite useless to tap the political barometer several times a day as once upon a time one used to do.... But it is still changing very fast. My journal of "Russia in 1919," while giving as I believe a fairly accurate picture of the state of affairs in February and March of 1919, pictures a very different stage in the development of the revolution from that which would be found by observers today.

The prolonged state of crisis in which the country has been kept by external war, while strengthening the ruling party by rallying even their enemies to their support, has had the other effects that a national crisis always has on the internal politics of a country. Methods of government which in normal times would no doubt be softened or disguised by ceremonial usage are used nakedly and justified by necessity. We have seen the same thing in belligerent and non-revolutionary countries, and, for the impartial student, it has been interesting to observe that, when this test of crisis is applied, the actual governmental machine in every country looks very much like that in every other. They wave different flags to stimulate enthusiasm and to justify submission. But that is all. Under the stress of war, "constitutional safeguards" go by the board "for the public good," in Moscow as elsewhere. Under that stress it becomes clear that, in spite of its novel constitution, Russia is governed much as other countries are governed, the real directive power lying in the hands of a comparatively small body which is able by hook or crook to infect with its conscious will a population largely indifferent and inert. A visitor to Moscow to-day would find much of the constitutional machinery that was in full working order in the spring of 1919 now falling into rust and disrepair. He would not be able once a week or so to attend All-Russian Executive and hear discussions in this parliament of the questions of the day. No one tries to shirk the fact that the Executive Committee has fallen into desuetude, from which, when the stress slackens enough to permit ceremonial that has not an immediate agitational value, it may some day be revived. The bulk of its members have been at the front or here and there about the country wrestling with the economic problem, and their work is more useful than their chatter. Thus brutally is the thing stated. The continued stress has made the muscles, the actual works, of the revolution more visible than formerly. The working of the machine is not only seen more clearly, but is also more frankly stated (perhaps simply because they too see it now more clearly), by the leaders themselves....