The Country Housewife and Lady's Director in the Management of a House, and the Delights and Profits of a Farm 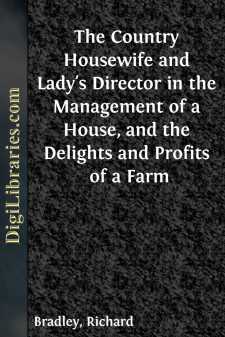 The Reason which induces me to address the following Piece to the Fair Sex, is, because the principal Matters contained in it are within the Liberty of their Province. The Art of Oeconomy is divided, as Xenophon tells us, between the Men and the Women; the Men have the most dangerous and laborious Share of it in the Fields, and without doors, and the Women have the Care and Management of every Business within doors, and to see after the good ordering of whatever is belonging to the House. And this, I conceive, is no less the Practice of these Days, than it was in the time of that great Philosopher; therefore it may seem necessary that I make some Apology for the Work I now publish, which, for the most part, falls within the Ladies Jurisdiction: but I hope I am the more excusable, as my Design is rather to assist, than to direct. I may call myself rather their Amanuensis, than their Instructor; for the Receipts which I imagine will give the greatest Lustre or Ornament to the following Treatise, are such as are practised by some of the most ingenious Ladies, who had Good-nature enough to admit of a Transcription of them for publick Benefit; and to do them justice, I must acknowledge that every one who has try'd them, allow them to excel in their way. The other Receipts are such as I have collected in my Travels, as well through England, as in foreign Countries, and are such as I was prompted to enter into my List, as well for their Curiosity as for their extraordinary Goodness.

I could have launched much further in this Attempt, but that I confined myself to publish only such as were necessary for the Use of a Farm; or, in other terms, for the good ordering of every thing which is the Produce of a Farm and Garden: And especially I am induced to publish a Tract of this nature for two Reasons, which I think carry some sway with them.

The first is, that I find many useful things about Farms, and in Gardens, whose Goodness is so little known, or understood, that they are seldom reckon'd of any account, and in most places are looked upon as Incumbrances; such as Mushrooms, Lupines, Brocoly, Morilles, Truffles Skirrets, Scorzonera, Salsifie, Colerape, Charddones, Boorencole, and many other such like things, which are excellent in their kind, when they are well dress'd, and admired by the greatest Epicures.

The other Reason which has induced me to publish this Piece, is, the Difficulties I have undergone in my Travels, when I have met with good Provisions, in many Places in England, which have been murder'd in the dressing.

I could mention many Instances as bad as the common Story of Bacon and Eggs strewed with brown Sugar: But as this was done through Ignorance, as the Story relates, I hope I need make no further Apology, or have occasion to give any other Reason for making this Treatise publick, but that it may improve the Ignorant, and remind the Learned how and when to make the best of every thing: which may be a means of providing every one with a tolerable Entertainment founded upon Practice and Fashion; which can never fail of Followers, and of making us fare much better upon the Roads in the Country than we were used to do.

I Shall in this Month take particular notice of the Pigeon, whose Characteristicks are chiefly to have short Legs, and their Feet of a reddish Colour, to have long Wings, and to be quick of Flight; in which the spreading of their Tail-Feathers greatly contribute, as well as to guide them in the Air. They by for the most part two Eggs for one sitting, and so more; but breed often in the Year. When Pigeons are once paired, it is observed they are very constant to one another, and assist each other in the Incubation or Sitting on the Eggs, as well as in bringing up and feeding the young ones; and moreover it is remarkable, that a Pigeon has no Gall-Bladder.

The sorts are, first, the blue wild Pigeon, which is the most frequent in Dove-Cotes, but is not very large, nor disposed to breed so early in the Spring as some others: they are, however, a hardy kind, and will thrive any where, if there is plenty of Water; for tho' they are not of a watery Race, yet it is observable, that they covet to be where it is, and that they feed frequently upon the Banks of Rivers and Ponds. I have known that where there were two Dove-Cotes, that stood within a Mile of one another, and one of them was near a River, and the other remote from it, the Pigeons of the House distant from the Water, left their Habitation to reside in that next the River, even tho' they had an Allowance of good Feed at home....