The Country Beyond A Romance of the Wilderness 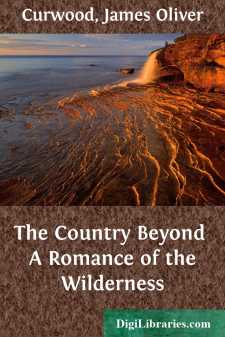 Not far from the rugged and storm-whipped north shore of Lake Superior, and south of the Kaministiqua, yet not as far south as the Rainy River waterway, there lay a paradise lost in the heart of a wilderness world—and in that paradise "a little corner of hell."

That was what the girl had called it once upon a time, when sobbing out the shame and the agony of it to herself. That was before Peter had come to leaven the drab of her life. But the hell was still there.

One would not have guessed its existence, standing at the bald top of Cragg's Ridge this wonderful thirtieth day of May. In the whiteness of winter one could look off over a hundred square miles of freezing forest and swamp and river country, with the gleam of ice-covered lakes here and there, fringed by their black spruce and cedar and balsam—a country of storm, of deep snows, and men and women whose blood ran red with the thrill that the hardship and the never-ending adventure of the wild.

But this was spring. And such a spring as had not come to the Canadian north country in many years. Until three days ago there had been a deluge of warm rains, and since then the sun had inundated the land with the golden warmth of summer. The last chill was gone from the air, and the last bit of frozen earth and muck from the deepest and blackest swamps, North, south, east and west the wilderness world was a glory of bursting life, of springtime mellowing into summer. Ridge upon ridge of yellows and greens and blacks swept away into the unknown distances like the billows of a vast sea; and between them lay the valleys and swamps, the lakes and waterways, glad with the rippling song of running waters, the sweet scents of early flowering time, and the joyous voice of all mating creatures.

Just under Cragg's Ridge lay the paradise, a meadow-like sweep of plain that reached down to the edge of Clearwater Lake, with clumps of poplars and white birch and darker tapestries of spruce and balsams dotting it like islets in a sea of verdant green. The flowers were two weeks ahead of their time and the sweet perfumes of late June, instead of May, rose up out of the plain, and already there was nesting in the velvety splashes of timber.

In the edge of a clump of this timber, flat on his belly, lay Peter. The love of adventure was in him, and today he had sallied forth on his most desperate enterprise. For the first time he had gone alone to the edge of Clearwater Lake, half a mile away; boldly he had trotted up and down the white strip of beach where the girl's footprints still remained in the sand, and defiantly he had yipped at the shimmering vastness of the water, and at the white gulls circling near him in quest of dead fish flung ashore. Peter was three months old. Yesterday he had been a timid pup, shrinking from the bigness and strangeness of everything about him; but today he had braved the lake trail on his own nerve, and nothing had dared to come near him in spite of his yipping, so that a great courage and a great desire were born in him....