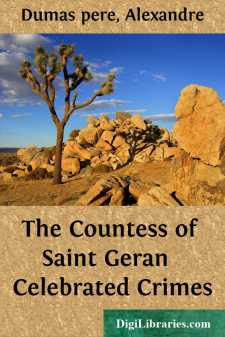 About the end of the year 1639, a troop of horsemen arrived, towards midday, in a little village at the northern extremity of the province of Auvergne, from the direction of Paris. The country folk assembled at the noise, and found it to proceed from the provost of the mounted police and his men. The heat was excessive, the horses were bathed in sweat, the horsemen covered with dust, and the party seemed on its return from an important expedition. A man left the escort, and asked an old woman who was spinning at her door if there was not an inn in the place. The woman and her children showed him a bush hanging over a door at the end of the only street in the village, and the escort recommenced its march at a walk. There was noticed, among the mounted men, a young man of distinguished appearance and richly dressed, who appeared to be a prisoner. This discovery redoubled the curiosity of the villagers, who followed the cavalcade as far as the door of the wine-shop. The host came out, cap in hand, and the provost enquired of him with a swaggering air if his pothouse was large enough to accommodate his troop, men and horses. The host replied that he had the best wine in the country to give to the king's servants, and that it would be easy to collect in the neighbourhood litter and forage enough for their horses. The provost listened contemptuously to these fine promises, gave the necessary orders as to what was to be done, and slid off his horse, uttering an oath proceeding from heat and fatigue. The horsemen clustered round the young man: one held his stirrup, and the provost deferentially gave way to him to enter the inn first. No, more doubt could be entertained that he was a prisoner of importance, and all kinds of conjectures were made. The men maintained that he must be charged with a great crime, otherwise a young nobleman of his rank would never have been arrested; the women argued, on the contrary, that it was impossible for such a pretty youth not to be innocent.

Inside the inn all was bustle: the serving-lads ran from cellar to garret; the host swore and despatched his servant-girls to the neighbours, and the hostess scolded her daughter, flattening her nose against the panes of a downstairs window to admire the handsome youth.

There were two tables in the principal eating-room. The provost took possession of one, leaving the other to the soldiers, who went in turn to tether their horses under a shed in the back yard; then he pointed to a stool for the prisoner, and seated himself opposite to him, rapping the table with his thick cane.

"Ouf!" he cried, with a fresh groan of weariness, "I heartily beg your pardon, marquis, for the bad wine I am giving you!"

"The wine is all very well, monsieur provost," said he, "but I cannot conceal from you that however agreeable your company is to me, this halt is very inconvenient; I am in a hurry to get through my ridiculous situation, and I should have liked to arrive in time to stop this affair at once."

The girl of the house was standing before the table with a pewter pot which she had just brought, and at these words she raised her eyes on the prisoner, with a reassured look which seemed to say, "I was sure that he was innocent."

"But," continued the marquis, carrying the glass to his lips, "this wine is not so bad as you say, monsieur provost."

Then turning to the girl, who was eyeing his gloves and his ruff—

"To your health, pretty child."

"Then," said the provost, amazed at this free and easy air, "perhaps I shall have to beg you to excuse your sleeping quarters."

"What!" exclaimed the marquis, "do we sleep here?"

"My lord;" said the provost, "we have sixteen long leagues to make, our horses are done up, and so far as I am concerned I declare that I am no better than my horse."

The marquis knocked on the table, and gave every indication of being greatly annoyed. The provost meanwhile puffed and blowed, stretched out his big boots, and mopped his forehead with his handkerchief. He was a portly man, with a puffy face, whom fatigue rendered singularly uncomfortable.

"Marquis," said he, "although your company, which affords me the opportunity of showing you some attention, is very precious to me, you cannot doubt that I had much rather enjoy it on another footing. If it be within your power, as you say, to release yourself from the hands of justice, the sooner you do so the better I shall be pleased. But I beg you to consider the state we are in. For my part, I am unfit to keep the saddle another hour, and are you not yourself knocked up by this forced march in the great heat?"

"True, so I am," said the marquis, letting his arms fall by his side.

"Well, then, let us rest here, sup here, if we can, and we will start quite fit in the cool of the morning."

"Agreed," replied the marquis; "but then let us pass the time in a becoming manner. I have two pistoles left, let them be given to these good fellows to drink. It is only fair that I should treat them, seeing that I am the cause of giving them so much trouble."

He threw two pieces of money on the table of the soldiers, who cried in chorus, "Long live M....