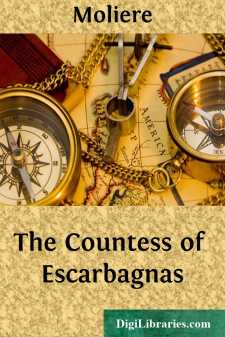 Visc. What! you are here already?

Ju. Yes, and you ought to be ashamed of yourself, Cléante; it is not right for a lover to be the last to come to the rendezvous.

Visc. I should have been here long ago if there were no importunate people in the world. I was stopped on my way by an old bore of rank, who asked me news of the court, merely to be able himself to detail to me the most absurd things that can well be imagined about it. You know that those great newsmongers are the curse of provincial towns, and that they have no greater anxiety than to spread, everywhere abroad all the tittle-tattle they pick up. This one showed me, to begin with, two large sheets of paper full to the very brim with the greatest imaginable amount of rubbish, which, he says, comes from the safest quarters. Then, as if it were a wonderful thing, he read full length and with great mystery all the stupid jokes in the Dutch Gazette, which he takes for gospel. He thinks that France is being brought to ruin by the pen of that writer, whose fine wit, according to him, is sufficient to defeat armies. After that he raved about the ministry, spoke of all its faults, and I thought he would never have done. If one is to believe him, he knows the secrets of the cabinet better than those who compose it. The policy of the state is an open book to him, and no step is taken without his seeing through it. He shows you the secret machinations of all that takes place, whither the wisdom of our neighbours tends, and controls at his will and pleasure all the affairs of Europe. His knowledge of what goes on extends as far as Africa and Asia, and he is informed of all that; is discussed in the privy council of Prester John.

Ju. You make the best excuse you can, and so arrange it that it may pass off well and be easily received.

Visc. I assure you, dear Julia, that this is the real reason of my being late. But if I wanted to say anything gallant, I could tell you that the rendezvous to which you bring me here might well excuse the sluggishness of which you complain. To compel me to pay my addresses to the lady of this house is certainly reason enough for me to fear being here the first. I ought not to have to bear the misery of it, except when she whom it amuses is present. I avoid finding myself alone with that ridiculous countess with whom you shackle me. In short, as I come only for your sake, I have every reason to stay away until you are here.

Ju. Oh! you will never lack the power of giving a bright colour to your faults. However, if you had come half an hour sooner, we should have enjoyed those few moments. For when I came, I found that the countess was out, and I have no doubt that she is gone all over the town to claim for herself the honour of the comedy you gave me under her name.

Visc. But, pray, when will you put an end to this, and make me buy less dearly the happiness of seeing you?

Ju. When our parents agree, which I scarcely dare hope for. You know as well as I do that the dissensions which exist between our two families deprive us of the possibility of seeing each other anywhere else, and that neither my brothers nor my father are likely to approve of our engagement....