The Countess of Albany 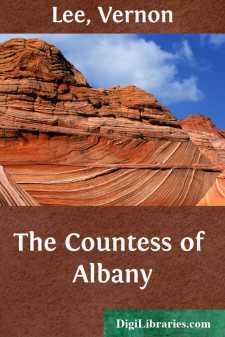 In preparing this volume on the Countess of Albany (which I consider as a kind of completion of my previous studies of eighteenth-century Italy), I have availed myself largely of Baron Alfred von Reumont's large work Die Gräfin von Albany (published in 1862); and of the monograph, itself partially founded on the foregoing, of M. St. René Taillandier, entitled La Comtesse d'Albany, published in Paris in 1862. Baron von Reumont's two volumes, written twenty years ago and when the generation which had come into personal contact with the Countess of Albany had not yet entirely died out; and M. St. René Taillandier's volume, which embodied the result of his researches into the archives of the Musée Fabre at Montpellier; might naturally be expected to have exhausted all the information obtainable about the subject of their and my studies. This has proved to be the case very much less than might have been anticipated. The publication, by Jacopo Bernardi and Carlo Milanesi, of a number of letters of Alfieri to Sienese friends, has afforded me an insight into Alfieri's character and his relations with the Countess of Albany such as was unattainable to Baron von Reumont and to M. St. René Taillandier. The examination, by myself and my friend Signor Mario Pratesi, of several hundreds of MS. letters of the Countess of Albany existing in public and private archives at Siena and at Milan, has added an important amount of what I may call psychological detail, overlooked by Baron von Reumont and unguessed by M. St. René Taillandier. I have, therefore, I trust, been able to reconstruct the Countess of Albany's spiritual likeness during the period—that of her early connection with Alfieri—which my predecessors have been satisfied to despatch in comparatively few pages, counterbalancing the thinness of this portion of their biographies by a degree of detail concerning the Countess's latter years, and the friends with whom she then corresponded, which, however interesting, cannot be considered as vital to the real subject of their works.

Besides the volumes of Baron von Reumont and M. St. René Taillandier, I have depended mainly upon Alfieri's autobiography, edited by Professor Teza, and supplemented by Bernardi's and Milanesi's Lettere di Vittorio Alfieri, published by Le Monnier in 1862. Among English books that I have put under contribution, I may mention Klose's Memoirs of Prince Charles Edward Stuart (Colburn, 1845), Ewald's Life and Times of Prince Charles Stuart (Chapman and Hall, 1875), and Sir Horace Mann's Letters to Walpole, edited by Dr. Doran. A review, variously attributed to Lockhart and to Dennistoun, in the Quarterly for 1847, has been all the more useful to me as I have been unable to procure, writing in Italy, the Tales of the Century, of which that paper gives a masterly account.

For various details I must refer to Charles Dutens' Mémoires d'un Voyageur qui se repose (Paris, 1806); to Silvagni's La Corte e la Società Romana nel secolo XVIII.; to Foscolo's Correspondence, Gino Capponi's Ricordi and those of d'Azeglio; to Giordani's works and Benassù Montanari's Life of Ippolito Pindemonti, besides the books quoted by Baron Reumont; and for what I may call the general pervading historical colouring (if indeed I have succeeded in giving any) of the background against which I have tried to sketch the Countess of Albany, Charles Edward and Alfieri, I can only refer generally to what is now a vague mass of detail accumulated by myself during the years of preparation for my Studies of the Eighteenth Century in Italy.

My debt to the kindness of persons who have put unpublished matter at my disposal, or helped me to collect various information, is a large one. In the first category, I wish to express my best thanks to the Director of the Public Library at Siena; to Cavaliere Guiseppe Porri, a great collector of autographs, in the same city; to the Countess Baldelli and Cavaliere Emilio Santarelli of Florence, who possess some most curious portraits and other relics of the Countess of Albany, Prince Charles Edward, and Alfieri; and also to my friend Count Pierre Boutourline, whose grandfather and great-aunt were among Madame d'Albany's friends. Among those who have kindly given me the benefit of their advice and assistance, I must mention foremost my friend Signor Mario Pratesi, the eminent novelist; and next to him the learned Director of the State Archives of Florence, Cavaliere Gaetano Milanese, and Doctor Guido Biagi, of the Biblioteca Vittorio Emanuel of Rome, without whose kindness my work would have been quite impossible.