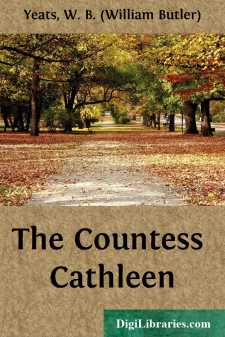 SCENE—A room with lighted fire, and a door into the open air, through which one sees, perhaps, the trees of a wood, and these trees should be painted in flat colour upon a gold or diapered sky. The walls are of one colour. The scene should have the effect of missal Painting. MARY, a woman of forty years or so, is grinding a quern.

MARY. What can have made the grey hen flutter so?

(TEIG, a boy of fourteen, is coming in with turf, which he lays beside the hearth.)

TEIG. They say that now the land is famine struck The graves are walking.

MARY. There is something that the hen hears.

TEIG. And that is not the worst; at Tubber-vanach A woman met a man with ears spread out, And they moved up and down like a bat's wing.

MARY. What can have kept your father all this while?

TEIG. Two nights ago, at Carrick-orus churchyard, A herdsman met a man who had no mouth, Nor eyes, nor ears; his face a wall of flesh; He saw him plainly by the light of the moon.

MARY. Look out, and tell me if your father's coming.

MARY. What is it?

TEIG. In the bush beyond, There are two birds—if you can call them birds— I could not see them rightly for the leaves. But they've the shape and colour of horned owls And I'm half certain they've a human face.

MARY. Mother of God, defend us!

TEIG. They're looking at me. What is the good of praying? father says. God and the Mother of God have dropped asleep. What do they care, he says, though the whole land Squeal like a rabbit under a weasel's tooth?

MARY. You'll bring misfortune with your blasphemies Upon your father, or yourself, or me. I would to God he were home—ah, there he is.

What was it kept you in the wood? You know I cannot get all sorts of accidents Out of my mind till you are home again.

SHEMUS. I'm in no mood to listen to your clatter. Although I tramped the woods for half a day, I've taken nothing, for the very rats, Badgers, and hedgehogs seem to have died of drought, And there was scarce a wind in the parched leaves.

TEIG. Then you have brought no dinner.

SHEMUS. After that I sat among the beggars at the cross-roads, And held a hollow hand among the others.

MARY. What, did you beg?

SHEMUS. I had no chance to beg, For when the beggars saw me they cried out They would not have another share their alms, And hunted me away with sticks and stones.

TEIG. You said that you would bring us food or money.

SHEMUS. What's in the house?

TEIG. A bit of mouldy bread.

TEIG. And when that's gone?

MARY. There is the hen in the coop.

TEIG. And the last penny gone.

SHEMUS. When the hen's gone, What can we do but live on sorrel and dock) And dandelion, till our mouths are green?

MARY. God, that to this hour's found bit and sup, Will cater for us still.

SHEMUS. His kitchen's bare. There were five doors that I looked through this day And saw the dead and not a soul to wake them.