The Correspondence of Thomas Carlyle and Ralph Waldo Emerson, 1834-1872, Vol. I 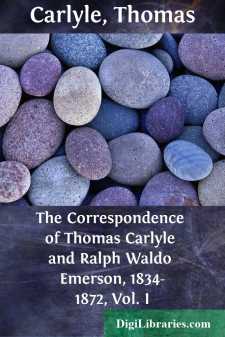 I. Emerson to Carlyle

My Dear Sir,—There are some purposes we delay long to execute simply because we have them more at heart than others, and such an one has been for many weeks, I may say months, my design of writing you an epistle.

Some chance wind of Fame blew your name to me, perhaps two years ago, as the author of papers which I had already distinguished (as indeed it was very easy to do) from the mass of English periodical criticism as by far the most original and profound essays of the day,—the works of a man of Faith as well as Intellect, sportive as well as learned, and who, belonging to the despairing and deriding class of philosophers, was not ashamed to hope and to speak sincerely. Like somebody in Wilhelm Meister, I said: This person has come under obligations to me and to all whom he has enlightened. He knows not how deeply I should grieve at his fall, if, in that exposed England where genius always hears the Devil's whisper, "All these kingdoms will I give thee," his virtue also should be an initial growth put off with age. When therefore I found myself in Europe, I went to your house only to say, "Faint not,—the word you utter is heard, though in the ends of the earth and by humblest men; it works, prevails." Drawn by strong regard to one of my teachers I went to see his person, and as he might say his environment at Craigenputtock. Yet it was to fulfil my duty, finish my mission, not with much hope of gratifying him,—in the spirit of "If I love you, what is that to you?" Well, it happened to me that I was delighted with my visit, justified to myself in my respect, and many a time upon the sea in my homeward voyage I remembered with joy the favored condition of my lonely philosopher, his happiest wedlock, his fortunate temper, his steadfast simplicity, his all means of happiness;—not that I had the remotest hope that he should so far depart from his theories as to expect happiness. On my arrival at home I rehearsed to several attentive ears what I had seen and heard, and they with joy received it.

In Liverpool I wrote to Mr. Fraser to send me Magazine, and I have now received four numbers of the Sartor Resartus, for whose light thanks evermore. I am glad that one living scholar is self-centred, and will be true to himself though none ever were before; who, as Montaigne says, "puts his ear close by himself, and holds his breath and listens." And none can be offended with the self-subsistency of one so catholic and jocund. And 't is good to have a new eye inspect our mouldy social forms, our politics, and schools, and religion. I say our, for it cannot have escaped you that a lecture upon these topics written for England may be read to America. Evermore thanks for the brave stand you have made for Spiritualism in these writings. But has literature any parallel to the oddity of the vehicle chosen to convey this treasure? I delight in the contents; the form, which my defective apprehension for a joke makes me not appreciate, I leave to your merry discretion....