The Cook's Oracle; and Housekeeper's Manual 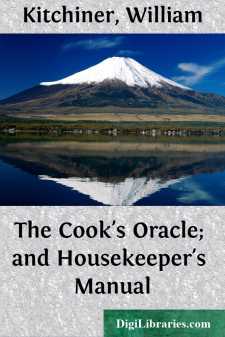 Among the multitudes of causes which concur to impair health and produce disease, the most general is the improper quality of our food: this most frequently arises from the injudicious manner in which it is prepared: yet strange, “passing strange,” this is the only one for which a remedy has not been sought; few persons bestow half so much attention on the preservation of their own health, as they daily devote to that of their dogs and horses.

The observations of the Guardians of Health respecting regimen, &c. have formed no more than a catalogue of those articles of food, which they have considered most proper for particular constitutions.

Some medical writers have, “in good set terms,” warned us against the pernicious effects of improper diet; but not one has been so kind as to take the trouble to direct us how to prepare food properly; excepting only the contributions of Count Rumford, who says, in pages 16 and 70 of his tenth Essay, “however low and vulgar this subject has hitherto generally been thought to be—in what Art or Science could improvements be made that would more powerfully contribute to increase the comforts and enjoyments of mankind? Would to God! that I could fix the public attention to this subject!”

The Editor has endeavoured to write the following receipts so plainly, that they may be as easily understood in the kitchen as he trusts they will be relished in the dining-room; and has been more ambitious to present to the Public a Work which will contribute to the daily comfort of all, than to seem elaborately scientific.

The practical part of the philosophy of the kitchen is certainly not the most agreeable; gastrology has to contend with its full share of those great impediments to all great improvements in scientific pursuits; the prejudices of the ignorant, and the misrepresentations of the envious.

The sagacity to comprehend and estimate the importance of any uncontemplated improvement, is confined to the very few on whom nature has bestowed a sufficient degree of perfection of the sense which is to measure it;—the candour to make a fair report of it, is still more uncommon; and the kindness to encourage it cannot often be expected from those whose most vital interest it is to prevent the developement of that by which their own importance, perhaps their only means of existence, may be for ever eclipsed: so, as Pope says, how many are

“Condemn’d in business or in arts to drudge,Without a rival, or without a judge:All fear, none aid you, and few understand.”

Improvements in Agriculture and the Breed of Cattle have been encouraged by premiums. Those who have obtained them, have been hailed as benefactors to society! but the Art of making use of these means of ameliorating Life and supporting a healthful Existence—Cookery—has been neglected!!

While the cultivators of the raw materials are distinguished and rewarded, the attempt to improve the processes, without which neither vegetable nor animal substances are fit for the food of man (astonishing to say), has been ridiculed, as unworthy the attention of a rational being!!

The most useful art—which the Editor has chosen to endeavour to illustrate, because nobody else has, and because he knew not how he could employ some leisure hours more beneficially for mankind, than to teach them to combine the “utile” with the “dulce,” and to increase their pleasures, without impairing their health, or impoverishing their fortune, has been for many years his favourite employment; and “The Art of Invigorating and Prolonging Life by Food, &c. &c.” and this Work, have insensibly become repositories for whatever observations he has made which he thought would make us “Live Happy, and Live Long!!!”

The Editor has considered the Art of Cookery, not merely as a mechanical operation, fit only for working cooks, but as the Analeptic part of the Art of Physic.

“How best the fickle fabric to supportOf mortal man; in healthful body howA healthful mind the longest to maintain,”(Armstrong,)

is an occupation neither unbecoming nor unworthy philosophers of the highest class: such only can comprehend its importance; which amounts to no less, than not only the enjoyment of the present moment, but the more precious advantage of improving and preserving health, and prolonging life, which depend on duly replenishing the daily waste of the human frame with materials pregnant with nutriment and easy of digestion....