The Cook's Decameron: a study in taste, containing over two hundred recipes for Italian dishes 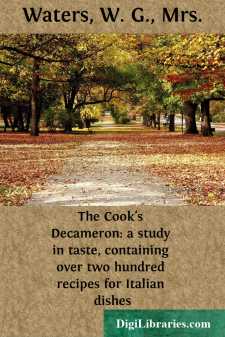 Montaigne in one of his essays* mentions the high excellence Italian cookery had attained in his day. "I have entered into this Discourse upon the Occasion of an Italian I lately receiv'd into my Service, and who was Clerk of the Kitchen to the late Cardinal Caraffa till his Death. I put this Fellow upon an Account of his office: Where he fell to Discourse of this Palate-Science, with such a settled Countenance and Magisterial Gravity, as if he had been handling some profound Point of Divinity. He made a Learned Distinction of the several sorts of Appetites, of that of a Man before he begins to eat, and of those after the second and third Service: The Means simply to satisfy the first, and then to raise and acute the other two: The ordering of the Sauces, first in general, and then proceeded to the Qualities of the Ingredients, and their Effects: The Differences of Sallets, according to their seasons, which ought to be serv'd up hot, and which cold: The Manner of their Garnishment and Decoration, to render them yet more acceptable to the Eye after which he entered upon the Order of the whole Service, full of weighty and important Considerations."

It is consistent with Montaigne's large-minded habit thus to applaud the gifts of this master of his art who happened not to be a Frenchman. It is a canon of belief with the modern Englishman that the French alone can achieve excellence in the art of cookery, and when once a notion of this sort shall have found a lodgment in an Englishman's brain, the task of removing it will be a hard one. Not for a moment is it suggested that Englishmen or any one else should cease to recognise the sovereign merits of French cookery; all that is entreated is toleration, and perchance approval, of cookery of other schools. But the favourable consideration of any plea of this sort is hindered by the fact that the vast majority of Englishmen when they go abroad find no other school of cookery by the testing of which they may form a comparison. This universal prevalence of French cookery may be held to be a proof of its supreme excellence—that it is first, and the rest nowhere; but the victory is not so complete as it seems, and the facts would bring grief and humiliation rather than patriotic pride to the heart of a Frenchman like Brillat-Savarin. For the cookery we meet in the hotels of the great European cities, though it may be based on French traditions, is not the genuine thing, but a bastard, cosmopolitan growth, the same everywhere, and generally vapid and uninteresting. French cookery of the grand school suffers by being associated with such commonplace achievements. It is noted in the following pages how rarely English people on their travels penetrate where true Italian cookery may be tasted, wherefore it has seemed worth while to place within the reach of English housewives some Italian recipes which are especially fitted for the presentation of English fare to English palates under a different and not unappetising guise....