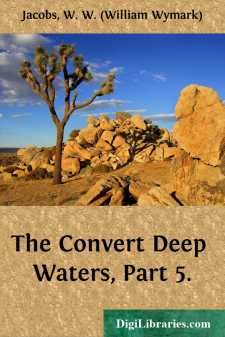 Mr. Purnip took the arm of the new recruit and hung over him almost tenderly as they walked along; Mr. Billing, with a look of conscious virtue on his jolly face, listened with much satisfaction to his friend's compliments.

"It's such an example," said the latter. "Now we've got you the others will follow like sheep. You will be a bright lamp in the darkness."

"I forgot," said the other, with something like a sigh. "No more fighting; but suppose somebody hits me?"

"They won't hit that; and when they see you standing there smiling at them—"

"After being hit?" interrupted Mr. Billing.

"After being hit," assented the other, "they'll be ashamed of themselves, and it'll hurt them more than if you struck them."

"Let's 'ope so," said the convert; "but it don't sound reasonable. I can hit a man pretty 'ard. Not that I'm bad-tempered, mind you; a bit quick, p'r'aps. And, after all, a good smack in the jaw saves any amount of argufying."

Mr. Purnip smiled, and, as they walked along, painted a glowing picture of the influence to be wielded by a first-class fighting-man who refused to fight. It was a rough neighbourhood, and he recognized with sorrow that more respect was paid to a heavy fist than to a noble intellect or a loving heart.

"And you combine them all," he said, patting his companion's arm.

Mr. Billing smiled. "You ought to know best," he said, modestly.

"You'll be surprised to find how easy it is," continued Mr. Purnip. "You will go from strength to strength. Old habits will disappear, and you will hardly know you have lost them. In a few months' time you will probably be wondering what you could ever have seen in beer, for example."

"I thought you said you didn't want me to give up beer?" said the other.

"We don't," said Mr. Purnip. "I mean that as you grow in stature you will simply lose the taste for it."

Mr. Billing came to a sudden full stop. "D'ye mean I shall lose my liking for a drop o' beer without being able to help myself?" he demanded, in an anxious voice.

"Of course, it doesn't happen in every case," he said, hastily.

Mr. Billing's features relaxed. "Well, let's 'ope I shall be one of the fortunate ones," he said, simply. "I can put up with a good deal, but when it comes to beer——"

"We shall see," said the other, smiling.

"We don't want to interfere with anybody's comfort; we want to make them happier, that's all. A little more kindness between man and man; a little more consideration for each other; a little more brightness in dull lives."

He paused at the corner of the street, and, with a hearty handshake, went off. Mr. Billing, a prey to somewhat mixed emotions, continued on his way home. The little knot of earnest men and women who had settled in the district to spread light and culture had been angling for him for some time....