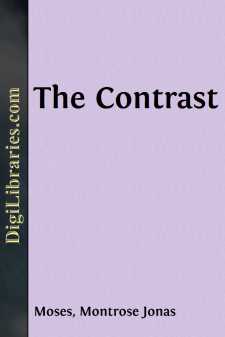 William Dunlap is considered the father of the American Theatre, and anyone who reads his history of the American Theatre will see how firmly founded are his claims to this title. But the first American play to be written by a native, and to gain the distinction of anything like a "run" is "The Contrast," by Royall Tyler. Unfortunately for us, the three hundred page manuscript of Tyler's "Life," which is in possession of one of his descendants, has never been published. Were that document available, it would throw much valuable light on the social history of New England. For Tyler was deep-dyed in New England traditions, and, strange to say, his playwriting began as a reaction against a Puritanical attitude toward the theatre.

When Tyler came to New York on a very momentous occasion, as an official in the suppression of Shays's Rebellion, he had little thought of ever putting his pen to paper as a playwright, although he was noted from earliest days as a man of literary ambition, his tongue being sharp in its wit, and his disposition being brilliant in the parlour. It was while in what was even then considered to be the very gay and wicked city of New York, that Royall Tyler went to the theatre for the first time, and, on that auspicious occasion, witnessed Sheridan's "The School for Scandal." We can imagine what the brilliancy of that moment must have been to the parched New England soul of our first American dramatist.

Two days afterwards, inspiration began to burn, and he dashed off, in a period of a few weeks, the comedy called "The Contrast," not so great a "contrast," however, that the literary student would fail to recognize "The School for Scandal" as its chief inspiration.

Our young dramatist, whose original name, William Clark Tyler, was changed, by act of Court, to Royall, was born in Boston on July 18, 1757, near the historic ground of Faneuil Hall. His father was one of the King's Councillors, and figured in the Stamp Act controversy. From him, young Tyler inherited much of his ability. The family was wealthy and influential. Naturally, the father being a graduate of Harvard, his son likewise went to that institution. His early boyhood, when he was at the grammar school, was passed amidst the tumult of the Stamp Act, and the quartering of troops in Boston. When he entered Harvard as a freshman, on July 15, 1772, three days before he was fifteen years old, he was thoroughly accustomed to the strenuous atmosphere of the coming Revolution.

There were many students in his class, who afterwards won distinction as chief justices, governors and United States senators, but at that time none of them were so sedate as to ignore the usual pranks of the college boy. Tyler's temperament is well exhibited by the fact that he was one of the foremost instigators in a fishing party from his room window, when the students hooked the wig of the reverend president from his head one morning as that potentate was going to chapel.

Tyler graduated with a B.A. degree from Harvard in July, 1776, the Valedictorian of his class; and was similarly honoured with a B.A. by Yale (1776). Three years after, he received an M.A. from Harvard and, in later life (1811), from the University of Vermont. He read law for three years with the Hon. Francis Dana, of Cambridge, and the Hon....