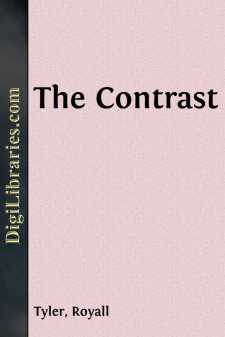 THE 'Contrast' was the first American play ever performed in public by a company of professional actors. Several plays by native authors had been previously published, the more noteworthy being the 'Prince of Parthia,' a tragedy by Thomas Godfrey of Philadelphia, which was probably written, and was offered to Hallam's company in 1759 (but not produced), and was printed in 1765, two years after the author's death.[1]

A comedy called the 'Mercenary Match,' by one Barnabas Bidwell, is said to have been performed by the students at Yale College, under the auspices of the Rev. Dr. Ezra Styles, President of the College. Dunlap speaks of having heard it read, but does not mention whether it was from a manuscript or printed copy. It was printed at New Haven in 1785. The 'Contrast,' however, was the first to meet successfully the critical judgment and approval of a professional manager. This fact alone should redeem it from the neglect and inattention it has heretofore met with. Besides, it possesses considerable intrinsic merit, and as an acting play will compare favorably with many of the English comedies of the period; and though, perhaps, meager in plot and incident, it is bright, humorous, and natural; the dialogue is sparkling with genuine wit; and its satire aimed at the evils and follies of the time is keen and incisive. The contrast between the plain and simple honesty of purpose and breeding of our American home life and the tinseled though polished hypocrisy and knavery of foreign fashionable society is finely delineated, and no doubt suggested the name of the play. Thoroughly natural in its plan and characters, it was a bold venture of a young writer in a new literary domain.

The character of Jonathan is a thoroughly original conception; nothing of the typical Yankee, since so familiar and popular, had as yet appeared, either on the stage or in print.

The 'Contrast' was first performed[2] at the John Street Theater, New-York City, on the 16th of April, 1787, and undoubtedly met with the approval of the public, as it was repeated on the 18th of April, the 2d and 12th of May the same season, and was reproduced with success later at Philadelphia, Baltimore, and Boston. It was, as far as can be learned, the first literary effort of its author, a most remarkable genius, and one of the pioneers in several branches of our literature, who, up to within a few weeks of its production, had never attended a theatrical performance.

Royall Tyler, the author of the 'Contrast,' was born at Boston, Mass., July 18, 1758, and belonged to one of the wealthiest and most influential families of New England. He received his early education at the Latin School, in his native city, graduated at Harvard, and during the Revolutionary War, and afterward in Shay's Rebellion, acted as aid-de-camp with the rank of Major on the staff of General Benjamin Lincoln. It was owing to the latter event that he came to New-York, being sent here by Governor Bowdoin on a diplomatic mission with reference to the capture of Shay, who had crossed the border line from Massachusetts into this State. This was the first time that Tyler had left his native New England, and the first time he could have seen the inside of a regular theater, thus confirming the statements made in the preface of the play as to the author's inexperience in the rules of the drama, and as to the short time within which it was written, as his arrival in New-York was within but a few weeks of its first performance....