The Confessions of Artemas Quibble 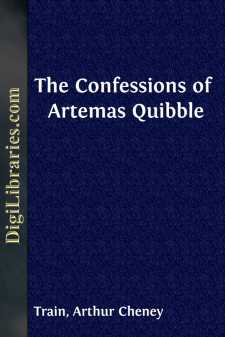 I was born in the town in Lynn, Massachusetts, upon the twenty- second day of February, in the year 1855. Unlike most writers of similar memoirs, I shall cast no aspersions upon the indigent by stating that my parents were poor but honest. They were poor and honest, as indeed, so far as I have been able to ascertain, have been all the Quibbles since the founder of the family came over on the good ship Susan and Ellen in 1635, and, after marrying a lady's maid who had been his fellow passenger, settled in the township of Weston, built a mill, and divided his time equally between selling rum to the Indians and rearing a numerous progeny.

My father, the Reverend Ezra Quibble, was, to be sure, poor enough. The salary that he received as pastor of his church was meagre to the degree of necessitating my wearing his over-worn and discarded clerical vestments, which to some extent may account for my otherwise inexplicable distaste for things ecclesiastical. My mother was poor, after wedlock, owing to the eccentricity of a parent who was so inexorably opposed to religion that he cut her off with a shilling upon her marriage to my father. Before this she had had and done what she chose, as was fitting for a daughter of a substantial citizen who had made a fortune in shoe leather.

I remember that one of my first experiments upon taking up the study of law was to investigate by grandfather's will in the probate office, with a view to determining whether or not, in his fury against the church, he had violated any of the canons of the law in regard to perpetuities or restraints upon alienation; or whether in his enthusiasm for the Society for the Propagation of Free Thinking, which he had established and intended to perpetuate, he had not been guilty of some technical slip or blunder that would enable me to seize upon its endowment for my own benefit. But the will, alas! had been drawn by that most careful of draughtsmen, old Tuckerman Toddleham, of 14 Barristers' Hall, Boston, and was as solid as the granite blocks of the court-house and as impregnable of legal attack as the Constitution.

We lived in a frame house, painted a disconsolate yellow. It abutted close upon the sidewalk and permitted the passer-by to view the family as we sat at meat or enjoyed the moderate delights of social intercourse with our neighbors, most of whom were likewise parishioners of my father.

My early instruction was received in the public schools of my native town, supplemented by tortured hours at home with "Greenleaf's Mental Arithmetic" and an exhaustive study of the major and minor prophets. The former stood me in good stead, but the latter I fear had small effect. At any rate, the impression made upon me bore little fruit, and after three years of them I found myself in about the same frame of mind as the Oxford student who, on being asked at his examination to distinguish between the major and minor prophets, wrote in answer: "God forbid that I should discriminate between such holy men!"

But for all that I was naturally of a studious and even scholarly disposition, and much preferred browsing among the miscellaneous books piled in a corner of the attic to playing the rough-and-tumble games in which my school-mates indulged....