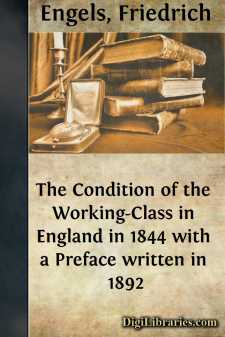 The history of the proletariat in England begins with the second half of the last century, with the invention of the steam-engine and of machinery for working cotton.  These inventions gave rise, as is well known, to an industrial revolution, a revolution which altered the whole civil society; one, the historical importance of which is only now beginning to be recognised.  England is the classic soil of this transformation, which was all the mightier, the more silently it proceeded; and England is, therefore, the classic land of its chief product also, the proletariat.  Only in England can the proletariat be studied in all its relations and from all sides.

We have not, here and now, to deal with the history of this revolution, nor with its vast importance for the present and the future.  Such a delineation must be reserved for a future, more comprehensive work.  For the moment, we must limit ourselves to the little that is necessary for understanding the facts that follow, for comprehending the present state of the English proletariat.

Before the introduction of machinery, the spinning and weaving of raw materials was carried on in the working-man’s home.  Wife and daughter spun the yarn that the father wove or that they sold, if he did not work it up himself.  These weaver families lived in the country in the neighbourhood of the towns, and could get on fairly well with their wages, because the home market was almost the only one, and the crushing power of competition that came later, with the conquest of foreign markets and the extension of trade, did not yet press upon wages.  There was, further, a constant increase in the demand for the home market, keeping pace with the slow increase in population and employing all the workers; and there was also the impossibility of vigorous competition of the workers among themselves, consequent upon the rural dispersion of their homes.  So it was that the weaver was usually in a position to lay by something, and rent a little piece of land, that he cultivated in his leisure hours, of which he had as many as he chose to take, since he could weave whenever and as long as he pleased.  True, he was a bad farmer and managed his land inefficiently, often obtaining but poor crops; nevertheless, he was no proletarian, he had a stake in the country, he was permanently settled, and stood one step higher in society than the English workman of to-day.

So the workers vegetated throughout a passably comfortable existence, leading a righteous and peaceful life in all piety and probity; and their material position was far better than that of their successors.  They did not need to overwork; they did no more than they chose to do, and yet earned what they needed.  They had leisure for healthful work in garden or field, work which, in itself, was recreation for them, and they could take part besides in the recreations and games of their neighbours, and all these games—bowling, cricket, football, etc., contributed to their physical health and vigour.  They were, for the most part, strong, well-built people, in whose physique little or no difference from that of their peasant neighbours was discoverable.  Their children grew up in the fresh country air, and, if they could help their parents at work, it was only occasionally; while of eight or twelve hours work for them there was no question.

What the moral and intellectual character of this class was may be guessed.  Shut off from the towns, which they never entered, their yarn and woven stuff being delivered to travelling agents for payment of wages—so shut off that old people who lived quite in the neighbourhood of the town never went thither until they were robbed of their trade by the introduction of machinery and obliged to look about them in the towns for work—the weavers stood upon the moral and intellectual plane of the yeomen with whom they were usually immediately connected through their little holdings.  They regarded their squire, the greatest landholder of the region, as their natural superior; they asked advice of him, laid their small disputes before him for settlement, and gave him all honour, as this patriarchal relation involved.  They were “respectable” people, good husbands and fathers, led moral lives because they had no temptation to be immoral, there being no groggeries or low houses in their vicinity, and because the host, at whose inn they now and then quenched their thirst, was also a respectable man, usually a large tenant farmer who took pride in his good order, good beer, and early hours.  They had their children the whole day at home, and brought them up in obedience and the fear of God; the patriarchal relationship remained undisturbed so long as the children were unmarried.  The young people grew up in idyllic simplicity and intimacy with their playmates until they married; and even though sexual intercourse before marriage almost unfailingly took place, this happened only when the moral obligation of marriage was recognised on both sides, and a subsequent wedding made everything good.  In short, the English industrial workers of those days lived and thought after the fashion still to be found here and there in Germany, in retirement and seclusion, without mental activity and without violent fluctuations in their position in life.  They could rarely read and far more rarely write; went regularly to church, never talked politics, never conspired, never thought, delighted in physical exercises, listened with inherited reverence when the Bible was read, and were, in their unquestioning humility, exceedingly well-disposed towards the “superior” classes.  But intellectually, they were dead; lived only for their petty, private interest, for their looms and gardens, and knew nothing of the mighty movement which, beyond their horizon, was sweeping through mankind.  They were comfortable in their silent vegetation, and but for the industrial revolution they would never have emerged from this existence, which, cosily romantic as it was, was nevertheless not worthy of human beings.  In truth, they were not human beings; they were merely toiling machines in the service of the few aristocrats who had guided history down to that time.  The industrial revolution has simply carried this out to its logical end by making the workers machines pure and simple, taking from them the last trace of independent activity, and so forcing them to think and demand a position worthy of men.  As in France politics, so in England manufacture, and the movement of civil society in general drew into the whirl of history the last classes which had remained sunk in apathetic indifference to the universal interests of mankind....