The Concept of Nature The Tarner Lectures Delivered in Trinity College, November 1919 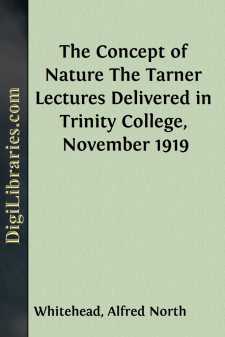 The contents of this book were originally delivered at Trinity College in the autumn of 1919 as the inaugural course of Tarner lectures. The Tarner lectureship is an occasional office founded by the liberality of Mr Edward Tarner. The duty of each of the successive holders of the post will be to deliver a course on ‘the Philosophy of the Sciences and the Relations or Want of Relations between the different Departments of Knowledge.’ The present book embodies the endeavour of the first lecturer of the series to fulfil his task.

The chapters retain their original lecture form and remain as delivered with the exception of minor changes designed to remove obscurities of expression. The lecture form has the advantage of suggesting an audience with a definite mental background which it is the purpose of the lecture to modify in a specific way. In the presentation of a novel outlook with wide ramifications a single line of communications from premises to conclusions is not sufficient for intelligibility. Your audience will construe whatever you say into conformity with their pre-existing outlook. For this reason the first two chapters and the last two chapters are essential for intelligibility though they hardly add to the formal completeness of the exposition. Their function is to prevent the reader from bolting up side tracks in pursuit of misunderstandings. The same reason dictates my avoidance of the existing technical terminology of philosophy. The modern natural philosophy is shot through and through with the fallacy of bifurcation which is discussed in the second chapter of this work. Accordingly all its technical terms in some subtle way presuppose a misunderstanding of my thesis. It is perhaps as well to state explicitly that if the reader indulges in the facile vice of bifurcation not a word of what I have here written will be intelligible.

The last two chapters do not properly belong to the special course. is a lecture delivered in the spring of 1920 before the Chemical Society of the students of the Imperial College of Science and Technology. It has been appended here as conveniently summing up and applying the doctrine of the book for an audience with one definite type of outlook.

This volume on ‘the Concept of Nature’ forms a companion book to my previous work An Enquiry concerning the Principles of Natural Knowledge. Either book can be read independently, but they supplement each other. In part the present book supplies points of view which were omitted from its predecessor; in part it traverses the same ground with an alternative exposition. For one thing, mathematical notation has been carefully avoided, and the results of mathematical deductions are assumed. Some of the explanations have been improved and others have been set in a new light. On the other hand important points of the previous work have been omitted where I have had nothing fresh to say about them. On the whole, whereas the former work based itself chiefly on ideas directly drawn from mathematical physics, the present book keeps closer to certain fields of philosophy and physics to the exclusion of mathematics. The two works meet in their discussions of some details of space and time.

I am not conscious that I have in any way altered my views. Some developments have been made. Those that are capable of a non-mathematical exposition have been incorporated in the text. The mathematical developments are alluded to in the last two chapters. They concern the adaptation of the principles of mathematical physics to the form of the relativity principle which is here maintained. Einstein’s method of using the theory of tensors is adopted, but the application is worked out on different lines and from different assumptions. Those of his results which have been verified by experience are obtained also by my methods. The divergence chiefly arises from the fact that I do not accept his theory of non-uniform space or his assumption as to the peculiar fundamental character of light-signals. I would not however be misunderstood to be lacking in appreciation of the value of his recent work on general relativity which has the high merit of first disclosing the way in which mathematical physics should proceed in the light of the principle of relativity. But in my judgment he has cramped the development of his brilliant mathematical method in the narrow bounds of a very doubtful philosophy.

The object of the present volume and of its predecessor is to lay the basis of a natural philosophy which is the necessary presupposition of a reorganised speculative physics....