The Complete Bachelor Manners for Men 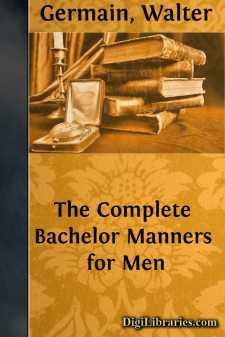 THE BACHELOR IN PUBLIC.

The average man is judged by his appearance and his deportment in public. His dress, his bearing, his conduct toward women and his fellow-men, are telling characteristics.

In the street, when walking with a woman—the term "lady" being objectionable, except in case of distinction—every man should be on his mettle. Common sense, which is the basis of all etiquette, teaches him that he should be her protector. Therefore, under general circumstances, his place is on the street or outer side. Should there be a crowd on the inner side, should the walking be muddy or rough, or should there be a building in process of repair, or one or the other of the inconveniences of city life, then the man should take the side which will enable him to shield his fair companion from all annoyance. At night a man offers his arm to a woman. In the daytime etiquette allows this only when the sidewalk is very rough, when there are steps to climb, a crowd to be piloted through, or a street crossing to effect. In any one of these emergencies suggest, "I think you will find it better to take my arm." A man never walks bodkin—that is, sandwiched between two women.

It is the privilege of a woman to bow first. She may have reasons why she should not wish to continue an acquaintance, and a man should never take the initiative. Abroad, in many countries, the man bows first. When old friends meet, however, the bowing is simultaneous.

A man lifts his hat in acknowledgment of any salutation made to the woman with whom he is walking. It is his place, on such an occasion, to bow to a man friend, whether the latter enjoys or does not have the pleasure of the acquaintance of the woman. A man's failure to do this signifies that the woman does not wish to know him, or that her companion does not wish her to know the other man.

Hotel corridors and halls may be classed as semi-public places. A man meeting a woman in one of these, where by custom he is permitted to keep on his hat, must step aside and let her pass, raising his hat as he does so. This does not apply to theater corridors, theater or hotel lobbies, or offices. In such houses as the Waldorf in New York, where the hall is utilized as a general sitting room by both sexes, it is not good form for a man to keep on his hat. In London, however, the rule is not as strict.

Men in this country do not lift their hats to one another, except when they are introduced in the open or a public place. Civility is never wasted, and it is proper, as well as an act of reverence, to thus salute a clergyman or a venerable and distinguished gentleman.

A man always lifts his hat when offering a woman a service, such as picking up or restoring to her a dropped pocket handkerchief or other article, or when passing a fare in a public conveyance, or when rendering any trifling assistance. Should she be with a male escort, the latter should raise his hat and thank the person who has rendered the service. This bit of politeness is under no circumstances the prelude to an acquaintance with an unescorted woman, and no gentleman would take advantage of it....