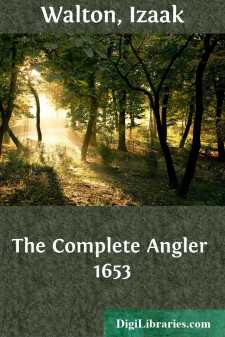 The “first edition” has been a favourite theme for the scorn of those who love it not. “The first edition—and the worst!” gibes a modern poet, and many are the true lovers of literature entirely insensitive to the accessory, historical or sentimental, associations of books. The present writer possesses a copy of one of Walton’s Lives, that of Bishop Sanderson, with the author’s donatory inscription to a friend upon the title-page. To keep this in his little library he has undergone willingly many privations, cheerfully faced hunger and cold rather than let it pass from his hand; yet, how often when, tremulously, he has unveiled this treasure to his visitors, how often has it been examined with undilating eyes, and cold, unenvious hearts! Yet so he must confess himself to have looked upon a friend’s superb first edition of “Pickwick” though surely not without that measure of interest which all, save the quite unlettered or unintelligent, must feel in seeing the first visible shape of a book of such resounding significance in English literature.

Such interest may, without fear of denial, be claimed for a facsimile of the first edition of “The Compleat Angler” after “Robinson Crusoe” perhaps the most popular of English classics. Thomas Westwood, whose gentle poetry, it is to be feared, has won but few listeners, has drawn this fancy picture of the commotion in St. Dunstan’s Churchyard on a May morning of the year 1653, when Richard Marriott first published the famous discourse, little dreaming that he had been chosen for the godfather of so distinguished an immortality. The lines form an epilogue to twelve beautiful sonnets à propos of the bi-centenary of Walton’s death:

“What, not a word for thee, O little tome,

The one that wears the quaintest, kindliest looks—

Seems most completely, cosily at home

Amongst its fellows. Ah! if thou couldst tell

Thy story—how, in sixteen fifty-three,

And how he stared and ... shook his sides with glee.

One story, this, which fact or fiction weaves.

Meanwhile, adorn my shelf, beloved of all—

Old book! with lavender between thy leaves,

And twenty ballads round thee on the wall.”

Whether there was quite such a rush as this on its publishing day we have no certain knowledge, though Westwood, in his “Chronicle of the Compleat Angler” speaks of “the almost immediate sale of the entire edition.” According to Sir Harris Nicolas, it was thus advertised in The Perfect Diurnall: from Monday, May 9th, to Monday, May 16th, 1653:

“The Compleat Angler, or the Contemplative Man’s Recreation, being a discourse of Fish and Fishing, not unworthy the perusal of most Anglers, of 18 pence price. Written by Iz. Wa. Also the Gipsee, never known Play of the Spanish Gipsee, never till now published: Both printed for Richard Marriot, to be sold at his shop in Saint Dunstan’s Churchyard, Fleet street.”