The Common Sense of Socialism A Series of Letters Addressed to Jonathan Edwards, of Pittsburg 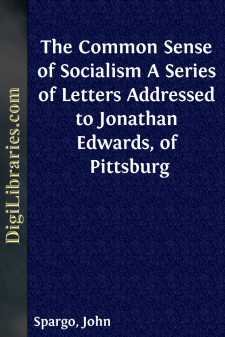 Socialism is undoubtedly spreading. It is, therefore, right and expedient that its teachings, its claims, its tendencies, its accusations and promises, should be honestly and seriously examined.—Prof. Flint.

My Dear Mr. Edwards: I count it good fortune to receive such letters of inquiry as that which you have written me. You could not easily have conferred greater pleasure upon me than you have by the charming candor and vigor of your letter. It is said that when President Lincoln saw Walt Whitman, "the good, Gray Poet," for the first time he exclaimed, "Well, he looks like a man!" and in like spirit, when I read your letter I could not help exclaiming, "Well, he writes like a man!"

There was no need, Mr. Edwards, for you to apologize for your letter: for its faulty grammar, its lack of "style" and "polish." I am not insensible to these, being a literary man, but, even at their highest valuation, grammar and literary style are by no means the most important elements of a letter. They are, after all, only like the clothes men wear. A knave or a fool may be dressed in the most perfect manner, while a good man or a sage may be poorly dressed, or even clad in rags. Scoundrels in broadcloth are not uncommon; gentlemen in fustian are sometimes met with.

He would be a very unwise man, you will admit, who tried to judge a man by his coat. President Lincoln was uncouth and ill-dressed, but he was a wise man and a gentleman in the highest and best sense of that much misused word. On the other hand, Mr. Blank, who represents railway interests in the United States Senate, is sleek, polished and well-dressed, but he is neither very wise nor very good. He is a gentleman only in the conventional, false sense of that word.

Lots of men could write a more brilliant letter than the one you have written to me, but there are not many men, even among professional writers, who could write a better one. What I like is the spirit of earnestness and the simple directness of it. You say that you have "Read lots of things in the papers about the Socialists' ideas and listened to some Socialist speakers, but never could get a very clear notion of what it was all about." And then you add "Whether Socialism is good or bad, wise or foolish, I want to know."

I wish, my friend, that there were more working men like you; that there were millions of American men and women crying out: "Whether Socialism is good or bad, wise or foolish, I want to know." For that is the beginning of wisdom: back of all the intellectual progress of the race is the cry, I want to know! It is a cry that belongs to wise hearts, such as Mr. Ruskin meant when he said, "A little group of wise hearts is better than a wilderness full of fools." There are lots of fools, both educated and uneducated, who say concerning Socialism, which is the greatest movement of our time, "I don't know anything about it and I don't want to know anything about it." Compared with the most learned man alive who takes that position, the least educated laborer in the land who says "I want to know!" is a philosopher compared with a fool.

When I first read your letter and saw the long list of your objections and questions I confess that I was somewhat frightened....