The Coming Wave Or, The Hidden Treasure of High Rock 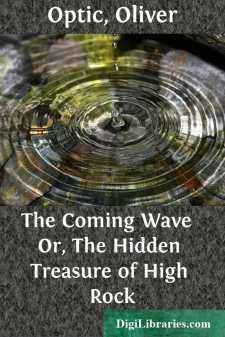 THE TEMPEST IN THE BAY.

"Well, parsenger, we're likely to get in to port before long, if we only have a breeze of wind," said Harvey Barth, the cook and steward of the brig Waldo, in a peculiar, drawling tone, by which any one who knew the speaker might have recognized him without the use of his eyes.

The steward was a tall, lank, lantern-jawed man, whose cheek-bones were almost as prominent as his long nose. His face was pale, in spite of the bronze which a West India sun had imparted to it, and his hair was long and straight. He had a very thin beard of jet black, which contrasted strongly with the pallor of his face. His voice was hollow, and sounded doubly so from the drawl with which he uttered his sentences, and every remark he made was preceded by a single long-drawn hacking cough, which might have been caused by the force of habit or the incipient workings of disease. He was seated in the galley, abaft the foremast of the brig, and when the passenger showed himself at the door of the galley, he had been engaged in writing in a square record-book, which he closed the instant the visitor darkened the aperture of his den.

The passenger—the only one on board of the Waldo—was a short, thick-set man of about forty, whose name was entered on the brig's papers as Jacob Wallbridge, and his trunk bore the initials corresponding to this name. In his hand he had a pipe, filled full of tobacco, and it was evident that he had called at the galley only to light it, though the steward proceeded to infold his book in an ample piece of oil-cloth which lay upon the seat at his side. It was clear that he did not wish the passenger to know what he was doing, or, at least, what he had written, for he was really quite nervous, as he securely tied the book, and then locked it up in a box under the seat. Though Harvey Barth did not confess it then, it was, nevertheless, a fact that he had been writing in his book about the passenger who darkened his door, though what he wrote was not seen by any human eye until many months after the pen had done its office.

"I thought this morning we should get in to-night," replied the passenger, as he stepped inside of the caboose. "May I borrow a coal of fire from the stove, doctor?"

"Certain, if you can get one; but the fire is about out. You will find some matches in the tin box on your right," added the steward.

"I like to light my pipe in the old-fashioned way when I can. I don't mean to begin to suck in brimstone just yet," continued Wallbridge, as he succeeded in finding a coal, and soon had his pipe in working order. "What were you doing with that book, doctor? Do you keep a log of the voyage?"

"Well, ya-as," drawled the steward. "I keep a log of this voyage, and a log of the voyage of life. I've kept a diary ever since I taught school; and that's seven years ago, come winter."

"It must be worth reading. I should like to look it over, if we have to stay out here another day. I suppose you have seen a good deal of the world, if you have been to sea many years."