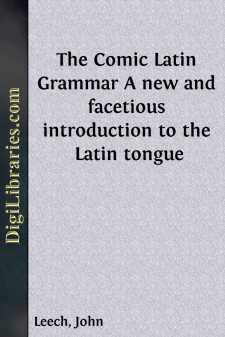 The Author of this little work cannot allow a second edition of it to go forth to the world, unaccompanied by a few words of apology, he being desirous of imitating, in every respect, the example of distinguished writers.

He begs that so much as the consciousness of being answerable for a great deal of nonsense, usually prompts a man to say, in the hope of disarming criticism, may be considered to have been said already. But he particularly requests that the want of additions to his book may be excused; and pleads, in arrest of judgment, his numerous and absorbing avocations.

Wishing to atone as much as possible for this deficiency, and prevailed upon by the importunity of his friends, he has allowed a portrait of himself, by that eminent artist, Mr. John Leech, to whom he is indebted for the embellishments, and very probably for the sale of the book, to be presented, facing the title-page, to the public.

Here again he has been influenced by the wish to comply with the requisitions of custom, and the disinclination to appear odd, whimsical, or peculiar.

On the admirable sketch itself, bare justice requires that he should speak somewhat in detail. The likeness he is told, he fears by too partial admirers, is excellent. The principle on which it has been executed, that of investing with an ideal magnitude, the proportions of nature, is plainly, from what we observe in heroic poetry, painting, and sculpture, the soul itself of the superhuman and sublime. Of the justness of the metaphorical compliment implied in the delineation of the head, it is not for the author to speak; of its exquisiteness and delicacy, his sense is too strong for expression. The habitual pensiveness of the elevated eyebrows, mingled with the momentary gaiety of the rest of the countenance, is one of the most successful points in the picture, and is as true to nature as it is indicative of art.

The Author’s tailor, though there are certain reasons why his name should not appear in print, desires to express his obligation to the talented artist for the very favourable impression which, without prejudice to truth, has been given to the public of his skill. The ease so conspicuous in the management of the surtout, and the thought so remarkable in the treatment of the trousers, fully warrant his admiration and gratitude.

Too great praise cannot be bestowed on the boots, considered with reference to art, though in this respect the Author is quite sensible that both himself and the maker of their originals have been greatly flattered. He is also perfectly aware that there is a degree of neatness, elegance, and spirit in the tie of the cravat, to which he has in reality never yet been able to attain.

In conclusion, he is much gratified by the taste displayed in furnishing him with so handsome a walking stick; and he assures all whom it may concern, that the hint thus bestowed will not be lost upon him; for he intends immediately to relinquish the large oaken cudgel which he has hitherto been accustomed to carry, and to appear, in every respect, to the present generation, such as he will descend to posterity.

A great book, says an old proverb, is a great evil; and a great preface, says a new one, is a great bore....